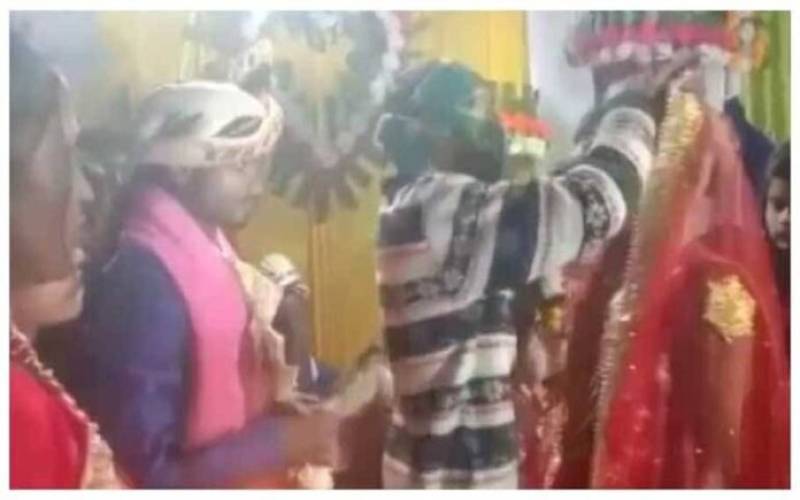 With a storyline similar to a Bollywood movie, a man crashed into the wedding of his ex-girlfriend and forcibly performed the final wedding rituals in Uttar Pradesh’s Gorakhpur City.

The masked ex-boyfriend allegedly crashed into his girlfriend’s wedding, forcibly lifted her veil and put sindoor (vermillion) on her forehead.

People present at the wedding recorded the incident and the video is now going viral on social media platforms.

It was only after a few seconds that those present at the venue subdued this man.

The wedding was taking place on December 1, in Harpur, Budhat in Gorakhpur.

In the video, the bride and groom can be seen standing on the stage surrounded by their relatives. After rituals, as the groom proceeds to put Varmaala, the masked man turns up creating a ruckus.

The man, who was the bride’s ex-boyfriend, had gone to another city to earn a living. In his absence, the bride’s family fixed her marriage to another man. Even after the bride tried to make her parents understand, they didn’t heed to her and proceeded with the marriage. When the news reached the man, he stormed the wedding venue and tried to stop the wedding.

However, the bride's family called the 112 and PRV ( Police Response Vehicles) and the drama ended.

The next day, the girl was married to the groom and the ex-lover was sent back.