Mark Twain famously said: there are three kinds of lies; lies, damned lies, and statistics. Data fudging has become so refined that it is an art now. Like almost every developing country, Pakistan’s finance ministers have excelled in it, their political affiliation and intellect on other issues notwithstanding. For instance, the graphs below show the purported growth in the economy.

The data and formulae, the government or multilateral financial institutions use, draw such numbers each year. Why do I say so? Because I speak to a man in the street in order to gauge the real impact of GDP growth as an observer of socio-economic development. The dominant segment of breadwinners makes less than PKR 12,000 every month, which is gravely insufficient; as a result, they are deprived of basic human needs. The purported GDP rates are not only a sham, they are also insulting, for one product is multiplied several times in calculating the growth rate to consequently produce erroneous statistics. 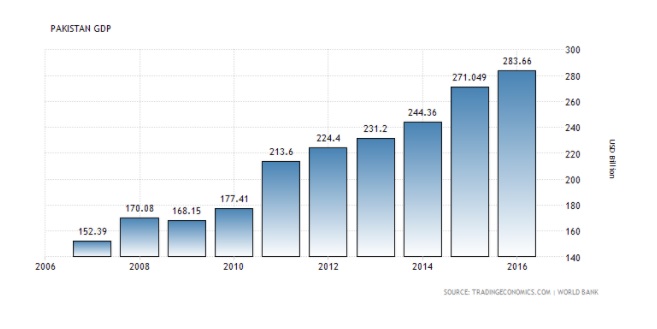 The ground realities of economic expansion

Instead of hammering the readers with jargon, figures and more charts, I introduce you to Asghar Khan and Aslam Raja. One is a pushcart vendor while the other a security guard.

Asghar Khan (52) retired from Pakistan Army over a decade ago. Now a security guard at a shopping plaza in Rawalpindi, his dependents include his wife, three children, and a mother.

“At this stage of my life, I can’t live away from my family and mother,” he says in between cigarette puffs. “Rawalakot has no prospects for a job. The families are expanding and our ancestral home was not built to harbor grandchildren from five sons.” He lives in a one-bedroom house in an impoverished area. Yet he’s happy that the children can go to a public school. Pindi offers him some respite for medical treatment of his 78-year-old mother who suffers from severe arthritis. Being a widow of retired military servant herself, she can get her free treatment in Fauji Foundation Hospital. “Even that costs me an entire day. I have to switch my shift with a colleague as we have to work six days a week for 12 hours a day.”

Not only is Asghar entitled to free medical treatment for his family, but he also receives a pension from his previous military service “which makes a real difference in living respectably.” Yet, he has no idea how would he be able to pay for his children’s college education. His eldest daughter is in 10th grade while the younger one is an eighth grader while his only son is in sixth class. “My wife insists that we must marry the girls with their cousins due to financial woes and changing values in our society.” Asghar has not budged so far. “Education made a huge difference between me and my friends. I never liked to go to school so here I am,” he says pointing to his military boots with his automatic weapon.

Asghar has no savings, not even a small piece of land in Rawalakot. He sold his share of inheritance to relocate to Rawalpindi. “My family lives in a state of fear.” It’s the fear of that moment when terrorist strikes a shopping mall or bank and security guards resist. “Whenever people hear of a terror attack or an attempt thwarted by a security guard, they thank Allah that so many lives are saved. Very few think of the security staff which laid his life in the process.” Asghar neither has health or life insurance nor gets overtime for working more than seven hours. He says death doesn’t scare him, but his children’s future without him sure does. So much for a nation victimized by terrorism since the Soviet invasion of Afghanistan!

Living in extreme jeopardy, a security guard is our front line of defense against crime and subversion. The services rendered by him are worth Rs 12,000 only. “If security, health, education and energy supply for a home are my responsibility then what’s the role of the republic, the state or the government,” Asghar nervously responded to my question about official claims of better civic services.

“I can’t even afford an honorable burial for a grave cost over Rs 15,000 at least. There’s no choice but to live and believe in His rehamat.”

Asghar rattled my faith in the indicators, which paint an optimistic picture of the country’s economy.

Raja Aslam has an even more harrowing life.  The street cart vendor in his mid-fifties struggles all day by roadside to sell seasonal fruits. He can earn no more than Rs 15,000 a month. Nuclear family’s needs are near impossible to meet in the prevailing times, he says. “I used to drive a taxi for the last 15 years and that was much better. But then came some companies and everybody became a taxi driver using the smartphone.” He was tauntingly referring to Careem and Uber riding services. “My taxi is old and did not meet their criteria. It did not have an air conditioner too.” Like hundreds of cab drivers, Aslam found himself in the middle of a crisis. Instead of waiting for the things to worsen further, he sold his car last July in the hope of going to Jeddah. Even that plan turned out to be a fiasco due to low oil prices. “I wasted my hard earned money on a flight and visa, and returned home after two months.” He never liked working on tandoor in the scorching summer heat of the desert terrain.

Not just Aslam, planeloads of foreign workers have returned to their countries since 2015 when oil prices dipped to record lows, and the Gulf region’s tensions deepened with Iran. In the whirlwind of changing times, the father of five had no idea where to look for employment or how to find time to retool himself, thus a fruit cart. Unlike Asghar, he can’t access Fauji Foundation hospital for free medical treatment of his family. His youngest is about 10 years old. His hard work and honesty is unchallenged. Yet none of his friends has a job for him.

“I am unable to pay back the loans taken for the marriage of my eldest daughter four years ago.” He tried approaching the Baitul Mal office but returned empty-handed. “Now I am caught in a cycle of debt. To pay in time to one friend or relative, I borrow from the other and so on.” His wife believes that Aslam spent on the wedding from his savings. He has two more daughters to educate or marry “whatever is more affordable”. So far his three younger children study in public school where education may not be great but the fee is minimal.

“Three months ago, my wife started sewing clothes in an effort to help me with household expenses.” She makes around Rs 5,000 a month, and a little better, hopefully, in marriage season and Eids. His fruit cart not only tires him a lot but also vulnerable to time. “Nobody wants a scarred apple or slightly over-ripe banana. You either throw it, eat it or sell it on half the price,” Aslam laments about his shrinking profit margin as well as public’s purchasing power.

The paradigm of human development

Some may blame me for choosing two depressing case studies to expose the weakness of the countries’ economic welfare. Well, much of the Pakistani populace is confronted with similar woes. Some are in even worse condition, forced to live in absolute poverty. Miserably, all the political elite and bureaucracy prefer to overlook the stark realities right before their eyes. Instead, the state exploits deprivation and the political elite thrives on poverty by using it in its viscous electoral sales pitch.

The children born in poverty face utmost challenges throughout their lives. Desires and dreams of betterment and progression should not remain fantasies. Energies in the conduit of evolution, optimism, and development make the preeminent. The struggle for betterment often leads to delinquency, which opens the doors to social unrest. Robin Hood, a famous thief, used to plunder the wealth of riches and distribute it to the deserving, is renowned as a protagonist and aide of the poor. Our society is well on the way of making many Robin Hoods if I let dark optimism be my guide. In the worst-case scenario, cannibalism can’t be ruled either.

Coming back to the question of data fudging to cover-up economic failure, I find global financial institutions and so-called think tanks on sustainable development equally culpable. Poverty is never artificial. You see it when it exists. You don’t see when opportunities, optimism, and self-respect prevail together. The rapid widening gap between the poor and the rich is not visible to the media, which spends an hour covering trivial rumors of someone’s marriage. In the normal world, all resources are being exploited to enhance the living standards of the people, but not in the land of the pure. Thus remain challenges like redistribution of wealth, the scrapping of the rotten feudalism, education reforms, provision of basic human needs, and equitable demarcation of provinces.

The taxes are more than enough but the tax net is not wide and strong enough. Well, stringent and widespread revenue collection system may not help if bureaucratic and political corruption remains. The culture of corruption works either ways, top to bottom and vice-versa.

Asghar's and Aslam's may soon lose heart. The victory against terrorism must be followed by a war against corruption. Otherwise, suicide bombing may be replaced with self-immolations.