Shahroz Sabzwari spills the beans on why he married Sadaf Kanwal 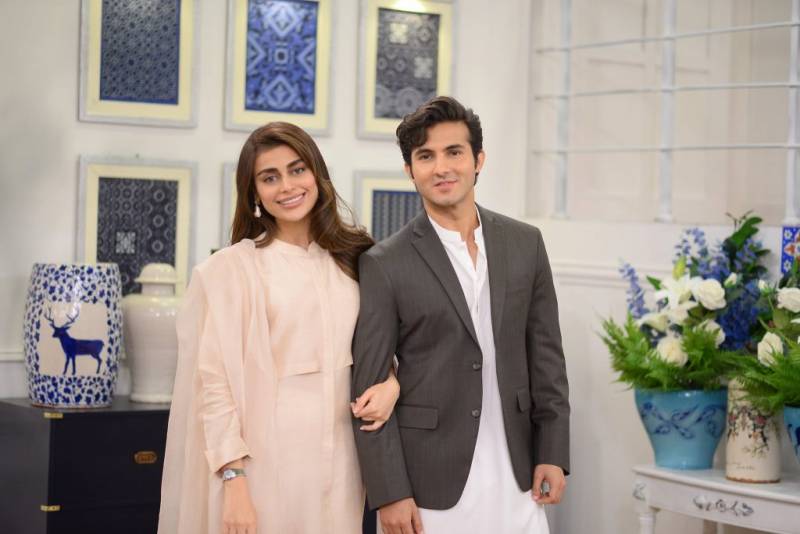 Shortly after calling quits with Syra Yousaf in the beginning of 2020, Shahroz Sabzwari tied the knot with supermodel Sadaf Kanwal in an intimate ceremony. Despite being accused of cheating, the newly married stood tall in the face of immense backlash and endless trolling on the internet.

Recently, the celebrity couple was spotted in a morning show with Nida Yasir and the couple ended up grabbing all the attention due to their interesting revelations.

Delving into details about their whirwind romance, they candidly spoke about how they met for the first time. Speaking about how Shahroz came to know about Sadaf, the Chain Aye Na actor shared he knew about his now-wife when she was at the prime of her modelling career.

"Her Instagram feed has always been gorgeous. We met once or twice at an event or an opening," he shared. The duo met for rehearsals of an award show and flew to Norway, "That's where our love story began,"

Talking about what attracted him towards Sadaf, the 35-year-old remarked, "I was going through a very difficult time in my life and then meeting someone like Sadaf, who is so pure that you can't help but get attracted to her. We don't have to exaggerate about this."

Further, he added, "I am a religious person. Our religion asks us to refrain from a lot of things and I try to stay away from it. There is so much we aren't permitted to do [in Islam], but if we get married, they become beautiful."

When Nida inquired what qualities Shahroz saw in Sadaf as his wife, he replied, "Purity. Even when we were in Norway, for everyone she was Sadaf Kanwal, the supermodel, who was always glammed up but I could see it. I think when there's a higher power at play, things work out. It was put in my heart by the Almighty, and I always saw a life partner in her."

The couple tied the knot in the midst of the Covid-19 lockdown in a very private gathering.

While discussing the intense backlash, the duo was nonchalant and maintained that they did not let the negativity bother them,

"We laugh at all the enmity; it had no impact on us. Do you think, now that you are looking at me, that I have been affected? I have a loving husband so these things do not affect me.", Sadaf added.

Earlier, Shahroz denied allegations of cheating on his wife Syra Yousaf with model-actor Kanwal. The Nand actor released a video message clarifying that he didn’t cheat on Yousuf adding he never wanted to divorce her, but circumstances made it impossible for them to continue together.