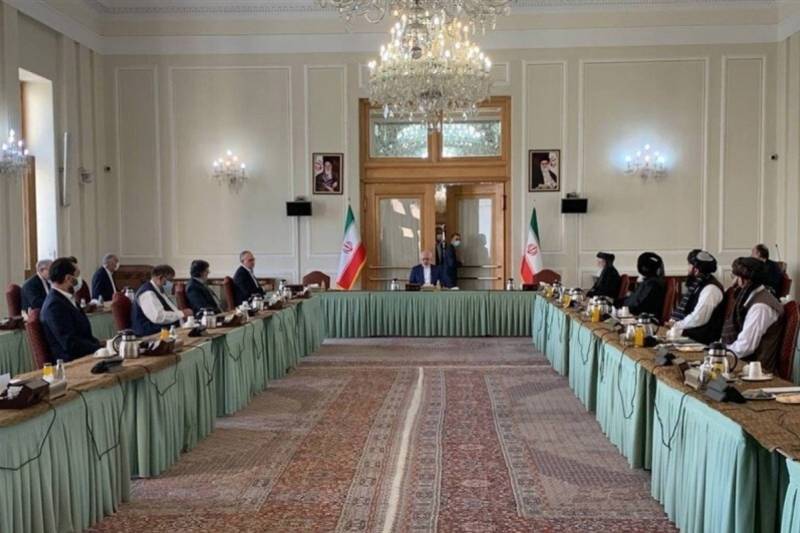 TEHRAN – An Afghan government delegation met with Taliban negotiators in the Iranian capital on Wednesday as insurgents continued to advance in the war-torn country following the US withdrawal.

Abbas Stanekzai, the head of the Taliban’s political bureau in Qatar, represented the militant group while the Afghan side was led by the country's former Vice President Yunus Qanooni.

"As foreign forces leave Afghanistan, no impediment remains for Afghans of all political stripes to chart a peaceful & prosperous future for the next generation. Iran stands with our Afghan brethren", the Iranian Foreign Minister shared a tweet stating that he felt honored to be the host of cordial & substantive dialog between senior Afghan representatives.

Honored to be host of cordial & substantive dialog between senior Afghan reps.

As foreign forces leave Afghanistan, no impediment remains for Afghans of all political stripes to chart a peaceful & prosperous future for the next generation.

Iran welcomed the departure of the US from its eastern borders but warned “Today, the people and political leaders of Afghanistan must make difficult decisions for the future of their country”.

Iran’s Tasnim news agency shared a clip of the crucial meeting chaired by Iranian top diplomat Mohammad Javad Zarif in Tehran, without naming any of the Afghans present.

The agency quoting the Iranian Foreign Minister said “Iran is ready to help in the process of dialogue between both sides in order to resolve the current conflicts and crises in Afghanistan while the Mohammad Suhail Shaheen, Taliban spokesperson, said, “discussions would touch on the current situation of the country and exchange views on a peaceful solution of the issue.”

Iran’s long border with Afghanistan places it on the front lines if fighting escalates and triggers a refugee crisis. The two countries have deep historical and cultural ties, and Iran is already home to almost 3 million displaced Afghans, according to the United Nations.

A statement issued by the Iranian ministry stated that Javad Zarif termed political unrest in the South Asian country as ‘dangerous’; he also urged both sides to return to the Afghan-led and Afghan-owned peace process, a ministry statement said. Afghan authorities must take ‘tough decisions for the future of their country while expressing Iran's readiness to facilitate intra-Afghan talks to resolve the conflict.

The delegations that arrived in the Iranian capital are also expected to hold talks with senior political and security officials during the brief visit.

Meanwhile, the key meeting occurred in the wake of US withdrawal from the ‘forever war’ as its forces left after 2 long decades. The surge in violence and takeover of many districts by the Taliban occurred after the withdrawal. The appalling security situation has alarmed neighboring countries including the meeting host Iran and Pakistan among others.

Iran on the other hand has called for peace in Afghanistan and repeatedly called for the expulsion of US and allied forces from the war-torn country. The engagement between the two sides has increased with many senior Taliban leaders frequently visiting the neighboring Islamic state and holding deliberations with top officials.

On Wednesday, the insurgents stormed the Badghis provincial capital Qalat-i-Naw, the first regional seat they have entered since the launch of their latest offensive, per reports. The militants already control all of the surrounding countrysides in the western province.

Earlier this week, Pakistan’s Prime Minister Imran Khan spoke with Iran's President-elect Ebrahim Raeisi in which both leaders expressed concern over the worsening security situation in Afghanistan and its potential repercussions as Iran and Pakistan are the main hosts of Afghan refugees in the region.