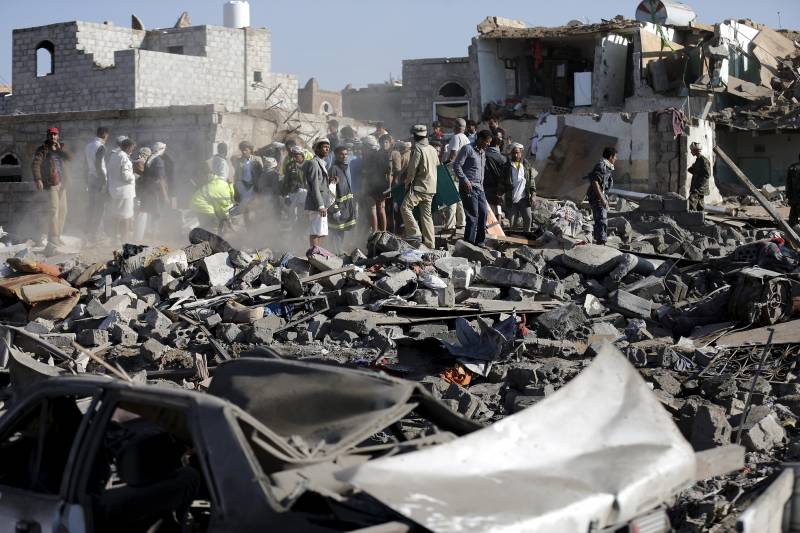 WASHINGTON/ADEN (Web Desk) - US Secretary of State John Kerry has warned Iran over its alleged support for Houthi rebels in Yemen.

He said the US would support any state in the Middle East that felt threatened by Iran, and would not "stand by" if Iran destabilised the region.

The US has stepped up its support for a Saudi-led coalition seeking to defend Yemen's President Abdrabbuh Mansour Hadi, who has fled the country.

Iran has denied accusations it is providing military aid to the rebels.

However, it dispatched two navy vessels to the Gulf of Aden, off the southern coast of Yemen, on Wednesday.

Navy commander Rear Adm Habibollah Sayyari told state media the move was made with the aim of "safeguarding naval routes for vessels in the region".

Meanwhile, aid supplies have begun reaching Yemen after a series of delays, as the humanitarian situation deteriorates amid continued fighting.

Speaking to PBS Newshour on Wednesday, Kerry said it was clear Iran was aiding the Houthis: "There are obviously supplies that have been coming from Iran. There are a number of flights every single week that have been flying in."

"Iran needs to recognise that the US is not going to stand by while the region is destabilised or while people engage in overt warfare across lines, international boundaries and other countries," he added.

Fighting has intensified in the city of Aden between the Houthis and militiamen loyal to President Hadi.

Meanwhile, warplanes from the Saudi-led coalition, which backs Hadi, have continued to bomb rebel targets across the country.

Iranian Foreign Minister Mohammad Javad Zarif has proposed a four-step solution to ending the crisis, including a ceasefire and formation of a broad-based government.

"The people of Yemen should not have to face aerial bombardment," he said while visiting Pakistan, which is currently debating whether to join the Saudi-led operation.

At least 22 people were reportedly killed on Wednesday by shelling in two residential districts in Aden.

After days of street fighting, conditions for civilians have been described as catastrophic by aid groups.

On Wednesday, boats carrying aid managed to arrive in Aden for the first time since the air campaign began on 25 March.

A ship carrying 1.7 tonnes of medical aid for Medecins Sans Frontieres (MSF), and another International Committee of the Red Cross (ICRC) boat carrying medical supplies and staff, docked at the port city.

The World Health Organization (WHO) has said that at least 560 people, including 76 children, were killed in Yemen between 19 March and 4 April. Another 1,700 people were wounded and 100,000 fled their homes.