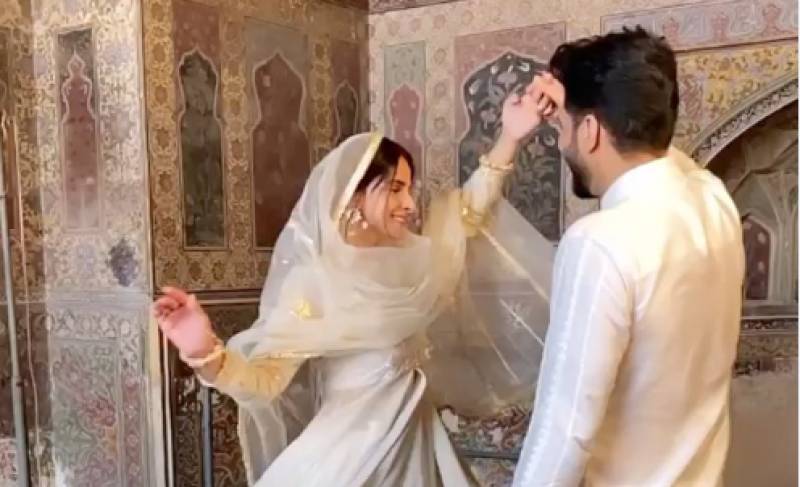 If you're famous, you need to be thick skinned. No one understands this better than our celebrities — just ask actor Saba Qamar, and Bilal Saeed, who have been fending off troll armies all weekend and in the best way possible.

BTS clips from Saba Qamar and Bilal Saeed's upcoming song ‘Qubool,’ have been making rounds on the internet for a while now. However, a certain snippet on social media has caught people’s attention:

People have been bashing the duo for shooting a ‘dance’ sequence at Wazir Khan mosque. According to people, a mosque is a holy place that is not meant for shooting music videos.

There is a difference b/w being liberal & disrespectful.
I guess common sense is not so common with #SabaQamar & #BilalSaeed who failed to comprehend the decorum of their surroundings @ #masjidwazirkhan

Dance&Singing at places of worship goes with #Hinduism not #Islamic Culture pic.twitter.com/S1dTpnEoYq

#SabaQamar
I Think Non- Muslims Are Better Then Muslims.😑😒 pic.twitter.com/dV8XXJikas

On Saturday, Saba Qamar took to her Instagram to respond to all the unfair criticism that she has received.

Posting a teaser of the video, Qamar explained that the nikkah sequence was shot without music at the mosque.

"Presenting the first teaser of ‘Qubool.’This is also the only sequence that was shot at the historical Wazir Khan Mosque. It’s a prologue to the music video featuring a Nikah scene. It was neither shot with any sort of playback music nor has it been edited to the music track. I won’t explain any further as the full video comes out on 11th of August," she wrote.

"The BTS video that's making rounds on social media was just a circular movement to click stills for the poster of ‘Qubool’ depicting a happily married couple right after their Nikah."

She further apologized and went on to say that she never wanted to disrespect a holy place or hurt anyone’s religious sentiments.

"Hurting or offending anyone or being disrespectful to a holy place is as unimaginable and unacceptable for me as for any decent human being. Despite this if we have unknowingly hurt anyone’s sentiments we apologize to you all with all our heart. Love & Peace! #Qubool releasing on 11th of August," Qamar concluded.

Bilal also posted the same teaser and shared that the shot does not feature any music. Him and Saba never intended to offend anyone is anyway possible.

Qubool has been directed by Saba Qamar and will feature her alongside Bilal. It will be released on August 11.