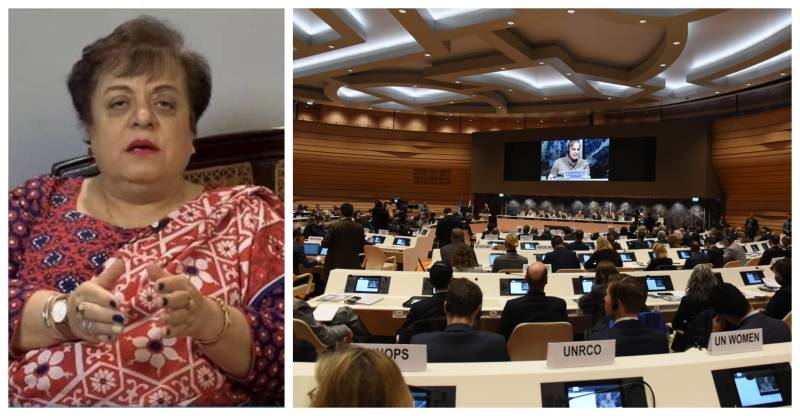 The Pakistan premier and UN Secretary General Antonio Guterres co-hosted the international conference on ‘Climate Resilient Pakistan’ in the Swiss city. It was attended by representatives from around 40 countries, international financial institutions, foundations and funds both in person and virtually.

However, Mazari, the former human rights minster, attempted to create an impression that it was a failedconference, claiming that there was low attendance by the international community. She also shared a couple of photos on Twitter, showing the Pakistani officials attending the conference.

“Pathetic attendance and it is in one of the small mtg rooms of the UN in Geneva because this is where side mtgs are normally held not main sessions of major conferences. Even in this small venue attendance only seems to be of Pak officials & only some mbrs of cabal of crooks,” she wrote.

Pathetic attendance and it is in one of the small mtg rooms of the UN in Geneva because this is where side mtgs are normally held not main sessions of major conferences. Even in this small venue attendance only seems to be of Pak officials & only some mbrs of cabal of crooks. pic.twitter.com/gKLkSUgm8s

However, it did not sit well with the social media users who lambasted her for politicising the conference.

In reply to her tweet, a user, Zeeshan Shah, shared a photo showing foreign officials attending the moot. He wrote: “Stop lying all the time, put your childish politics aside and support the poor people of this country for once. You’re becoming an embarrassment”.

Here’s how other people reacted;

An academic person’s Criticism should have some standards. Hollow & vague sort of criticism possesses no mass & worth. 🙏🏻

And yes. The actual picture 🙌🏻 pic.twitter.com/yDS4WOcGQX

Not a single person in comment section agrees with her, what a shame @ShireenMazari1 sahiba :(

There is not even an iota of patriotism in the cult formally referred to as PTI. Blinded by ambition and animosity they exhibit no refrain and constantly malign and ridicule their own country even at such a critical moment. Is it asking too much to take a step back momentarily?

In the day-long conference, PM Shehbaz launched the ‘Resilient Recovery, Rehabilitation, and Recons­truction Framework’ (4RF) and urged the world to provide $8 billion for rehabilitation in Pakistan.

“Pakistan has built a framework for the country’s uplift,” he said in his address, adding that the first part of this plan reflected priorities for recovery and reconstruction of the flood-hit areas.

“Bearing in mind the minimum funding requirement of $16.3 billion, half of which was proposed to be met from domestic resources and the other half from development partners and friends, the funding gap for minimum recovery is $8 billion which will be needed over the next three years,” he said.

Last year, Pakistan witnessed record floods that claimed more than 1,700 lives and affected 33 million people. The post-disaster reports estimated that the losses due to the floods exceeded $30 billion.

Information Minister Marriyum Aurangzeb said the world community pledged generous support of $8.57 billion for the rehabilitation and reconstruction of flood-hit areas in Pakistan at the Geneva conference.