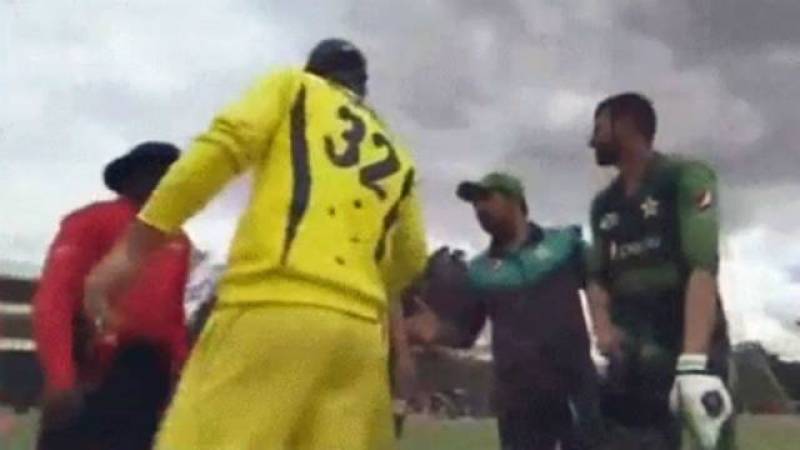 SYDNEY - Australia’s star all-rounder Glenn Maxwell has clarified his account of events after a video appeared to show him snubbing a handshake from Pakistan captain Safraz Ahmed, following a backlash from commentators and fans on social media.

The 29-year-old took to Twitter to explain the situation was a ‘genuine oversight’ and not deliberate, as he looked to have avoided Sarfraz while going on to shake hands with other Pakistan players on Sunday.

Pakistan romped to a six-wicket win over Australia to clinch the Tri-series final victory, with opener Fakhar Zaman hitting 91 off 46 balls as the men in green chased down 184. It was a fine effort from Pakistan in the chase after they lost two wickets in the first over bowled by Aussie all-rounder Glenn Maxwell.

However, Zaman and veteran all-rounder Shoaib Malik (43) saw the world No1 team past the finish line.

After the match got over, there was a moment of controversy.

As Sarfraz Ahmed went in to shake hands with the Aussie players, Maxwell was captured on camera failing to meet the Pakistan skipper’s extended hand.

Maxwell commented that it was an innocent misunderstanding on his part in not shaking Safraz’s hand.

“Congrats to Pakistan on their win yesterday, Fakhar Zaman and Shoaib Malik were unstoppable. Sad note to end our tour of Zimbabwe, but still plenty of positives to take out of it,” Maxwell opened.

“In regards to the incident shown post match, it appears unsportsmanlike, and certainly not the way I play the game. It was a genuine oversight on my behalf and I’m currently looking for Sarfraz in the hotel to shake his hand and congratulate him and his team on their series win.”

HARARE - Fakhar Zaman's brilliant 91 helped Pakistan grab a victory over Australia in the final match of a tri-nation ...

Earlier this year, the Australian cricket team was hit with a ball-tampering scandal which led to bans for ex-skipper Steve Smith, David Warner and Cameron Bancroft.

Maxwell, who became the first batsman to hit a century in his maiden T20 innings as an opener against Sri Lanka in 2016, is targeting a return to the Australian Test side for the two matches against Pakistan which will take place in the UAE in October this year.