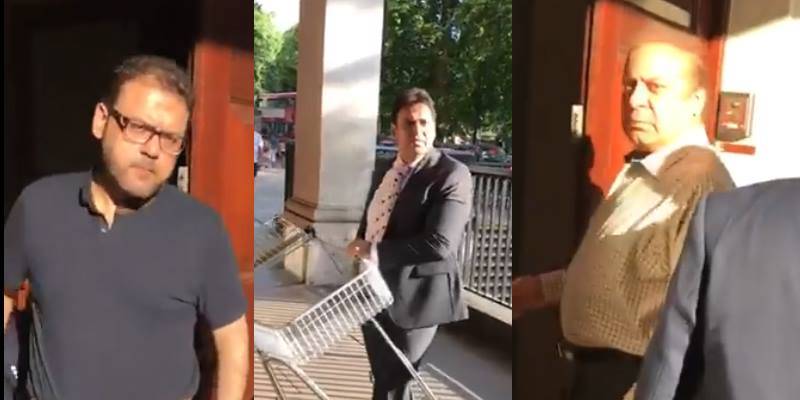 LONDON - A small group of people gathered in front of the Avenfield apartments owned by the Sharif family in London on Sunday and tried to break into the house forcefully.

The protesters, who are said to be workers of Pakistan Tehreek-e-Insaf (PTI), attempted to enter the flats after former prime minister Nawaz Sharif, who is in London to see ailing Kulsoom Nawaz, reached.

A video circulating on the social media show angry protesters raising slogans and attacking a member of Pakistan Muslim League-Nawaz's (PML-N), Ejaz Gull, by throwing a shopping cart at him.

In another video clip, some protesters trying to break back entrance of the flats.

Footage shows attempt being made by PTI activists to break the entrance of Hasan nawaz Sharif’s flat. Metropolitan police sources says police has obtained footage of the attackers and will take action for attempted assault and damage to property #AvenfieldApartments pic.twitter.com/XnBsXSBNHv

Following the protest, Britain's Metropolitan Police reached the site. However, no one has been arrested so far for protesting outside the properties of Sharif family.

Meanwhile, the British chapter of the PTI disassociated himself from the violent protest, adding that legal action should be taken against the suspects.

"We are not associated in any way with the attack on Hussain Nawaz's residence or the related protest," the spokesperson stated.

The protest comes as an accountability court sentenced Nawaz Sharif, his daughter Maryam Nawaz and son-in-law Captain Safdar in a corruption reference pertaining to London flats.

In the 100-page decision, Accountability Judge Mohammad Bashir also sentenced Sharif’s daughter, Maryam Nawaz, to seven years in jail for forgery and making assets through illegal sources in the landmark decision. She has been ordered to pay a fine of £2 million (Rs320 million).

Moreover, the judge ordered to seal the property in question, suggesting the government to do legislation to bring plundered money back to the country.

Capt (r) Safdar Awan, who is the son-in-law of Nawaz Sharif, was jailed for one year for cheating.

The Friday’s verdict is in line with Section 9 of the NAB Ordinance, 1999, which pertains to corruption and corrupt practices.