Corps Commander Peshawar Shaheen Mazhar Mehmood was the chief guest on this occasion. Senior Minister for sports, Tourism and Youth Affairs Muhammad Atif Khan, federal and provincial lawmakers from Chitral and Gilgit-Batistan, a huge number of spectators and supporters of the Gilgit-Baltistan and Chitral teams were also present.

There was great enthusiasm witnessed about the support of the arch-rival Chitral and Gilgit-Baltistan in the 50-minute match as the sitting spectators responded well with their cheering hands. It was a superb job done by the organisers for the local and foreign tourists who reached the world highest polo ground despite poor roads and enjoyed the King's Game.

Shandur Polo ground is situated at a highest level 3800m called as the "Roof of the World" and the King Games has been held annually since 1936. Most of the time the Chitral dominated in the Shandur Polo Festival which is an annual feature of the match was started with Corps Commander Shaheen Mazhar Mehmood thrown out the ball in the mid of the jam-pack crowd. Skillful riders exhibited a perfect hour control and hitting some perfect short in the first 25-minute session of the 50-minute final. 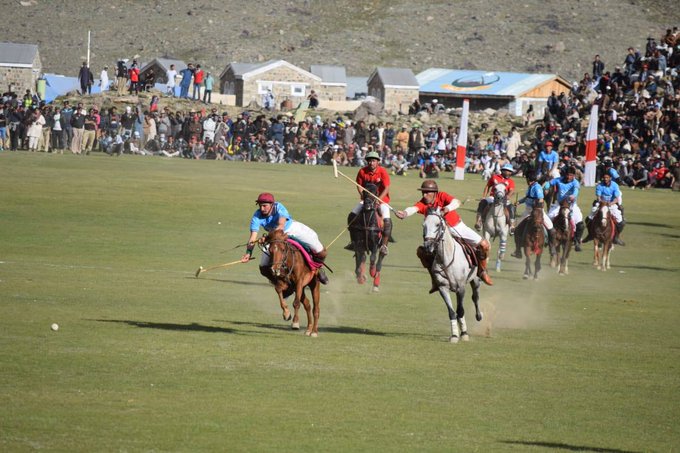 Chitral took the lead in the very outset of the final when veteran and key player of the Chitral Sikander Ul Mulk slammed in beautiful goal on long drive, straightly gone into the goal-post in the free from foul traditional polo match.

The goal certainly injected new vigor in the rank of Chitral team but in the very next minute Asmat Ullah slammed scored a perfect goal equalizing the tally 1-1. Chitral scored two more goals later on.

Gilgit-Baltistan scored another goal through Muhammad Yasir when he dispatched a good and perfect forceful hit into the goal-post to make the tally 5-2 before the half-time. It was the second session Gilgit Baltistan rested Shoukat and decided to play with five players and thus from Chitral Sikander Ul Mulk was also rested. The second session was a 5-5 players battle.

Gilgit-Baltistan scored three more goals when Yasir, Asmat Ullah scored their second goals respectively and Sajid Ullah made it 5-5. When the tally was leveled at 5-5, it was Chitral who scored another goal through Tuaseef, another star player, making the tally 6-5 in the dying moments of the match.

Thus, Chitral won the match by 6-5 and the supporters of the Chitral team thronged into the middle of the ground by dancing and cheering with the team players.

At the end, KP Senior Minister Muhammad Atif Khan and Commander 11 Corps gave away the trophies and cash prizes. Speaking on this occasion, Muhammad Atif Khan lauded Gilgit-Baltistan and Chitral teams for their excellent display and expressed the hope that the festival would be proved as a source of promoting Polo in KP. He said steps have been taken for the promotion of polo besides ensuring easy access by developing roads and other facilities.

Free-styled mountain polo is arguably polo in its purest form. This version of the game played at Shandur-Top has attained legendary status and is of great interest to international and domestic adventure tourists alike. There are no umpires and there are no holds barred.

The rules are - There are no rules! In "The Roof of the World" as compared by historian to an American Wild West rodeo might pass for choir practice." A player once mentioned: "You can ride head-on into the opponent, if you dare."

The festival, being organized by the TCKP and administration of Chitral district, attracts thousands of foreign and domestic tourists, fans of "King of games and game of kings" polo to watch the thrilling matches between the teams of Chitral and Gilgit-Baltistan.