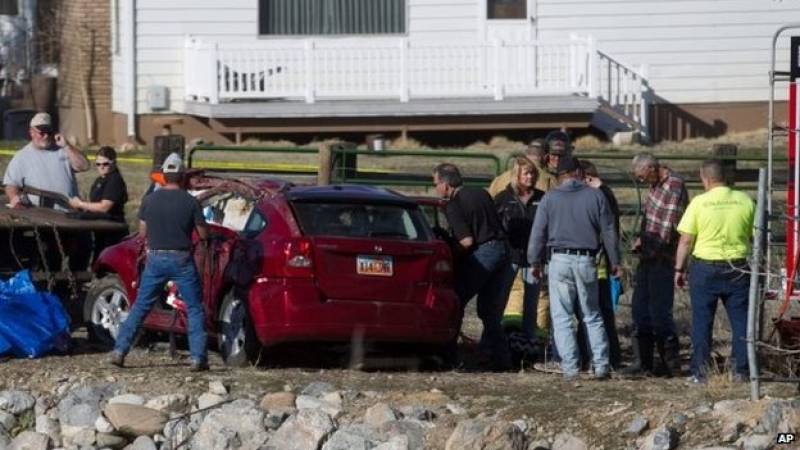 SPANISH FORK (US) (Web Desk) – An 18-month-old girl survived a car crash in a frigid Utah river after being strapped in a car seat upside-down for some 14 hours before being found by a fisherman, officers said. The condition of Lily Groesbeck was upgraded from critical to stable but critical condition at a Salt Lake City hospital, but her 25-year-old mother, Lynn Groesbeck of Springville, was found dead in the car, police said yesterday.

"She is doing remarkably well considering the circumstance. The doctors have been hopeful so far," the mother's sister, Jill Sanderson, told KSL-TV of Salt Lake City yesterday.

"We would like to express our appreciation to the Spanish Fork rescue team for saving the baby's life." The fisherman discovered the car on its top about 12:30 pm Saturday in the Spanish Fork River, about 80 kilometers south of Salt Lake City, police Lieutenant Matt Johnson said.

Investigators believe the wreck occurred about 10:30 pm Friday when a resident near the accident scene reported hearing a noise, Johnson said. The resident was unable to find anything unusual when checking the area near Provo.

The girl was found hanging upside down above the river that flowed through the car, and the water never reached high enough to touch her, Johnson told the Deseret News newspaper.

Her mother was found in the driver's seat.

The car struck a cement barrier on the bridge and careened into the river, investigators said. It landed under the bridge and was difficult to see from the road. Police are unsure why the car left the road, and the Utah Highway Patrol is assisting in the accident investigation.

Family members told police that Lynn Groesbeck left her parents' nearby home in Salem about 10 pm Friday and was en route to her Springville home near Provo when the crash occurred.

She was enrolled at Provo College with a goal of becoming a medical assistant, Sanderson said, and had lived in the Provo area her entire life.

"She was very compassionate and a very loving person and always willing to bend over backwards for her loved ones," Sanderson told KSL. "Her baby was the love of her life. She was an amazing mother."

Three police officers and four firefighters who entered the river to push the car on its side and rescue the girl were released after treatment for hypothermia at a hospital.

The temperature dipped to about 0 to 3 Celsius overnight while the girl was trapped in the car.