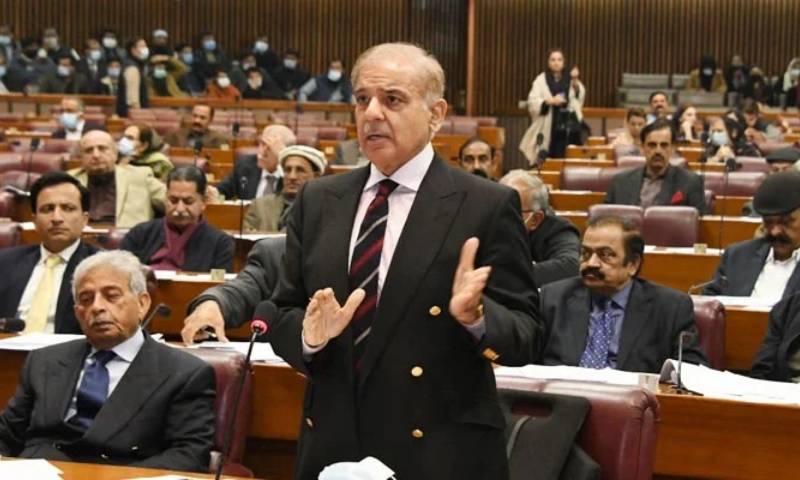 Reports in local media said Minister of State for Parliamentary Affairs Murtaza Javed Abbasi tabled the resolution in the lower house of the parliament.

Prime Minister Shehbaz Sharif, while addressing the NA session, blasted at the former premier for controversial speeches against the state institutions. He termed Imran’s speech a ‘grand conspiracy against Pakistan’ and its institutions.

Statements of PTI chief could cause anarchy in Pakistan, Sharif said while pointing out Khan’s recent speech in Abbottabad.

Taking a jibe at Imran Khan, Sharif said the former premier, being a ‘favorite’, was treated like a baby for three and a half years, adding that the key institution has never supported any of the previous premiers the way it did Imran Niazi.

Lamenting PTI's performance, Sharif said it is unfortunate that despite all support he didn’t learn, perform or deliver to the nation. He also mentioned that “If we would have got even one-third of the support that Imran Khan got, we could have elevated Pakistan like a jet in the air.

The kind of language PTI chairman used in the latest gathering could spark the devastation, he cautioned.

The development comes as the PTI chairman in his latest public rally in Abbottabad, said ‘only animals were neutral’ which many referred to military leadership which did not interfere during the no-trust move against the ousted PM.

RAWALPINDI – The media wing of the Pakistan Army has warned against dragging the country’s armed forces and ...

The recent backlash comes on the heels of the military’s media wing’s statement warning politicians, journalists, and analysts against dragging armed forces and its leadership in the country’s political affairs, saying that the practice is ‘extremely damaging’.