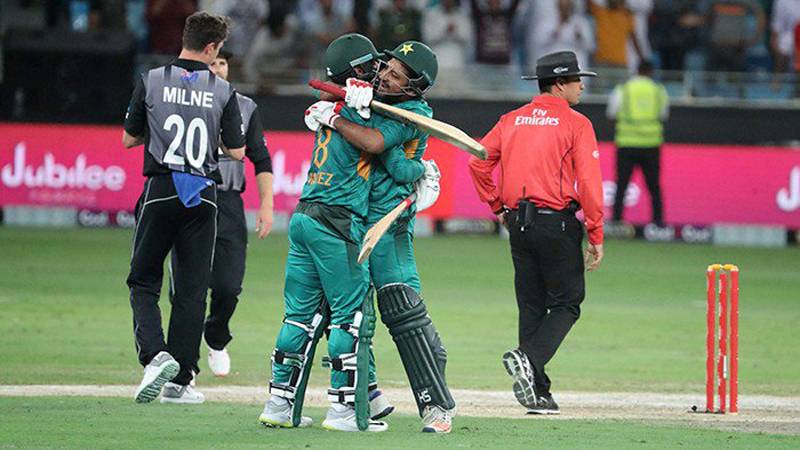 Shaheen Shah Afridi led the charge, picking up four wickets for 38 runs as he disintegrated the Kiwis' middle-order. Hassan Ali picked up two wickets for 59 runs.

Ross Taylor top-scored with a 120-ball 86 and Henry Nicholls made 33 off 63 balls and together added 75 for the fifth wicket to lift their team from 73-4.

For Pakistan, all-rounder Faheem Ashraf replaced fast bowler Junaid Khan, who is suffering from an infection in his right foot toe. Junaid has also been ruled out of the 3rd ODI against New Zealand on Sunday.

New Zealand, who won the toss and opted to bat, managed 209-9 in their 50 overs in the second day-night international against Pakistan in Abu Dhabi on Friday.

Ross Taylor top-scored with a 120-ball 86 and Henry Nicholls made 33 off 63 balls and together added 75 for the fifth wicket to lift their team from 73-4 at Sheikh Zayed Stadium.

The Kiwis fielded the same side, who defeated, Pakistan by 47 runs on Wednesday to take a 1-0 lead in the three-match series.

However, the Green Shirts have called in all-rounder Faheem Ashraf in place of fast bowler Junaid Khan, who is suffering from an infection in his right foot toe.

Junaid has also been ruled out of the third ODI against New Zealand on Sunday.

The match was scheduled to start at 04:00 pm. The match is being broadcast live on PTV Sports network.

New Zealand leading the series 1-0 and will be looking to seal the series, after defeating Pakistan by 47 runs in the first match on Wednesday.

Both the teams have played six matches in Abu Dhabi so far, out of which, the Kiwis won five while Green Shirts could win only one match.

Pacer Trent Boult destroyed Pakistan's top order batting line during the first game and he became the third New Zealand bowler to claim an ODI hat-trick, reduced Pakistan to eight for three in their chase of 267.

He dismissed opener Fakhar Zaman (one), Babar Azam and Mohammad Hafeez on a duck in the third over.

Sarfraz Ahmed, Imad Wasim, and Shoaib Malik tried to lift the innings with half-centuries, they could not fix the damage from the first 20 overs of the innings.

He will be hoping that his top-order batsmen get some runs under their belt in today's game.

Sarfraz needs 120 more to complete 2000 career runs, and four more catches to complete a 100 of them in ODIs.

This year, five out of the six ODIs in Abu Dhabi have been won by the team batting first. Moreover, a total of 250 runs or thereabouts should prove competitive.

The third and final ODI will be played in Dubai on Sunday.