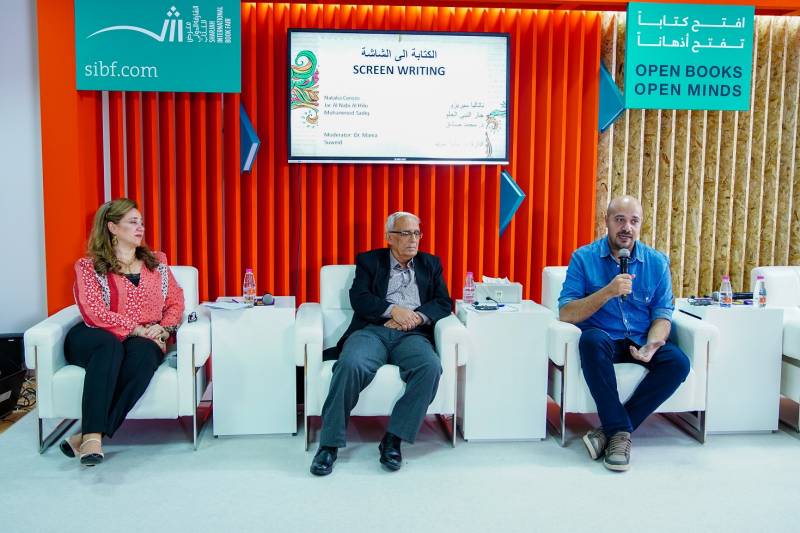 SHARJAH - Acclaimed novelists and storytellers from the Arab world discussed the art of turning the written word into the film at a forum during the Sharjah International Book Fair 2019 last night called “Screenwriting”.

During the session, Jar Al-Nabi, novelist and storyteller who has brought 12 serials and three books to TV and film, and Mohamed Sadek, author of best-selling novel Hepta, that was made into a successful film, described their experiences of taking stories from print to screen.

Jar al-Nabi said, “Creative expression can take several forms. When the written word is transferred to the cinema it passes through different processes and requires different techniques. It takes an army of people to bring the vision of the book alive and it won’t necessarily be the same as the novel. There are many different things to consider. A writer is the lone voice of his novel and can do as he pleases. But with a film or TV show, this is a huge collaboration between cinematographer, director, producer, music composer, wardrobe, lighting, etcetera, all to bring the story alive. Also, in order to create the vision, something will be changed as the reader is a different person than the cinema goer, there are different requirements. Things will be changed, and it is all part of the process.”

The film of Mohamed Sadek's book called Hepta: The Last Lecture is currently rated an impressive 7.7 on IMDB but he says, there was some controversy over whether the film or novel was better. He said, “There is always this debate when a popular book is made into a movie – people argue what is better. For myself, I was told the book was better, but probably the associates of the film director said the movie was better. Although it is inevitable that the film and the book will have creative differences and that can be hard for the writer, ultimately it is the producer’s decision and there are many reasons why things have to be different beyond the knowledge of the writer.”