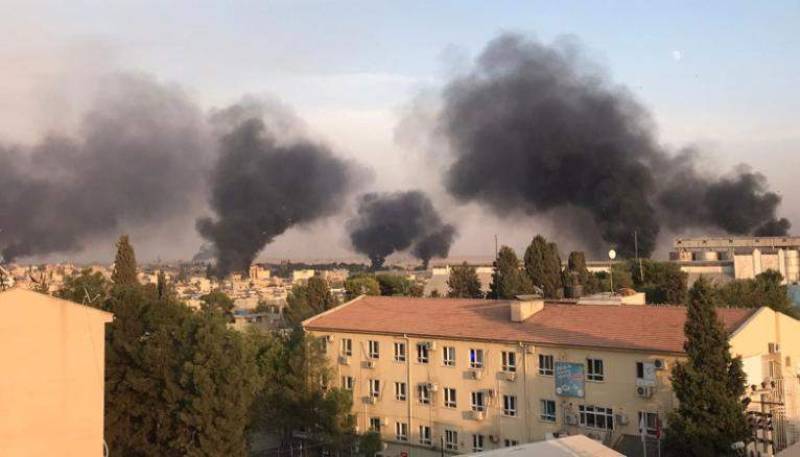 DAMASCUS - Turkish warplanes started bombing parts of north-eastern Syria on Wednesday at the start of an offensive, prompting fears of conflict with Kurdish-led allies of the US. '

Kurdish-led Syrian Democratic Forces (SDF) said the strikes killed at least two civilians in the village of Misharrafa, vowing to resist any Turkish advance across the border.

Turkish artillery shelling is targeting areas near the Bouzra dam in Derik, which provides water to civilians in northern Syria, according to the SDF which said it had halted counter-ISIS operations to focus on the Turkish offensive.

SDF spokesman Mustafa Bali tweeted Wednesday that the forces would "clash against the Turks to stop them from crossing the border.

"We will use all our possibilities against Turkish aggression," Bali said.

The offensive was launched just days after US President Donald Trump controversially withdrew US troops from northern Syria; Trump talked to Erdogan after which the decision was made.

Though the scale of the offensive is not yet clear, Erdogan stated on Twitter that the mission "was to prevent the creation of a terror corridor across our southern border, and to bring peace to the area" and that it would "preserve Syria's territorial integrity and liberate local communities from terrorists."

#OperationPeaceSpring will neutralize terror threats against Turkey and lead to the establishment of a safe zone, facilitating the return of Syrian refugees to their homes.

We will preserve Syria’s territorial integrity and liberate local communities from terrorists.

It is still not clear whether Turkish ground forces had attempted to enter Syria.

On the other hand, US Secretary of State Mike Pompeo told journalists that "we've made clear that this conflict shouldn't be militarized."

Moreover, Russian President Vladimir Putin has asked his Turkish counterpart Recep Tayyip Erdogan to "carefully weigh the situation" in Syria, so as not to "harm the overall efforts to resolve" the crisis, according to a statement released by the Kremlin.

In the statement, the Kremlin also underlined "the importance of ensuring the unity and territorial integrity of Syria and respect for its sovereignty was noted on both sides."