NIGHT VISION: the drops that help you see in 'darkness' 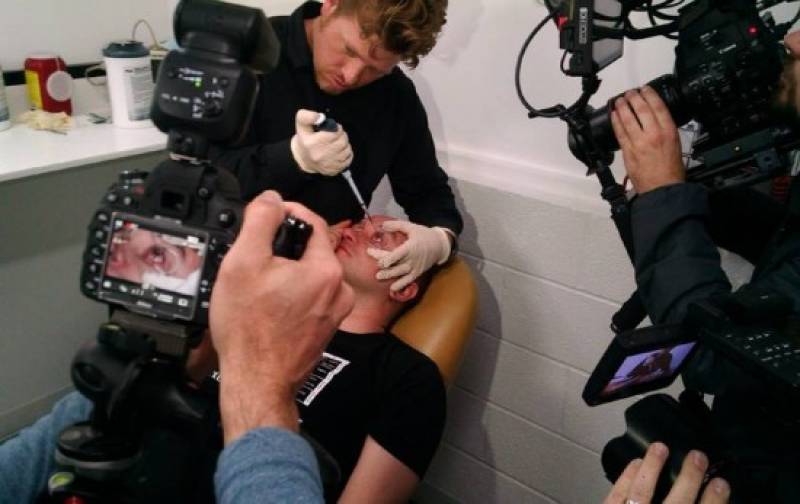 CALIFORNIA (Web Desk) - A team of California scientists, or ‘biohackers’ as they call themselves, claim to have discovered a way for people to achieve night-vision without the use of special goggles, reported Oddity Central.

They recently conducted an experiment called Science for the Masses(SftM), in which they injected a volunteer’s eyes with a special liquid solution that gave him superhuman night-vision.

After receiving the injection, the volunteer – researcher Gabriel Licina – could supposedly see up to a distance of 50 meters in almost total darkness for several hours, and could spot people running among trees in dark conditions. In comparison, people who weren’t treated with the solution did not fare as well.

The mystifying solution apparently contains a substance called Chlorin e6 (Ce6), which is found in some deep-sea fish. It has light-amplification properties, and has also been used in cancer treatment research. By combining Ce6 with insulin and saline, the team was able to produce a solution that can improve vision in the dark.

During the experiment, the scientists dropped the liquid onto the conjunctival sacs on Gabriel’s eyes, using a pipette. When the solution reached his retinas, his eyes turned scarily black for a while, but later returned to their normal color. “To me, it was a quick, greenish-black blur across my vision, and then it dissolved into my eyes,” Gabriel said.

In order to protect his eyes from potential bright light exposure, the team covered them in black contact lenses. And within an hour, his vision had considerably improved in low-light conditions. Gabriel, along with four other test subjects who weren’t given the solution, were taken to a ‘darkened area’ to test the effects. They were all asked to identify symbols in the dark and spot individuals moving among trees.

According to the researchers, “The Ce6 subject consistently recognised the symbols that did not seem to be visible to the controls.” In the second test, they noted that “The Ce6 subject identified the distant figures 100 percent of the time, with the controls showing a 33 percent identification rate.”

“It’s subtle,” Gabriel explained. “It’s not like ‘oh my gosh I have super vision!’ It’s more like dark became dim, everything was a little bit brighter. Not a crazy noticeable light, burning and doom, but a more subtle, ‘oh I can see a thing!’”

Once the tests were complete, Gabriel was asked to wear sunglasses while he slept, and his eyesight returned to normal the next morning. No side effects were noted up to 20 days after the experiment, but the team said that further testing was needed to “confirm and measure the degree and improvement in health subjects.”

As interesting as the experiment sounds, the researchers warned that it should not be tried at home. They noted in their paper that “the high risk of cellular toxicity from outside contaminants being absorbed through the skin make this chemical something that should only be handled with caution.” They also wrote that the application of Ce6 could cause damage to the cellular structure of the eye.

Gabriel said that he was willing to risk the experiment because of all the work he’d done as a part of the research team himself. “It’s more difficult to sue yourself,” he joked. “We have done the research, we’ve double and triple checked all of our sources and the journal papers. We are serious about what we do, we are serious about science, so that means we read a lot of journals papers.”

On their website, SftM described their mission: “To aid in the development of ‘citizen science’; we want to see the tools and resources necessary to perform scientific research made available to anyone that wants them.”