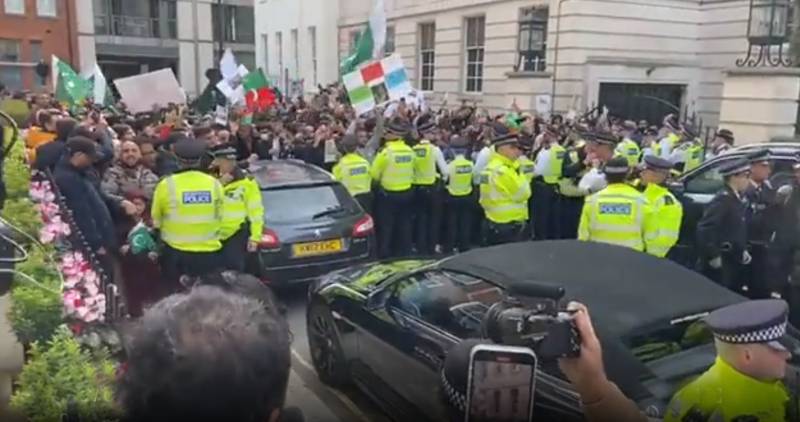 LAHORE – Pakistan Tehreek-e-Insaf (PTI) workers held a demonstration outside the residence of former prime minister Nawaz Sharif, a day after Imran Khan was ousted from premiership through a no-confidence vote.

Scores of activists of the former ruling party held protests in the British capital on Sunday against the removal of Imran Khan as prime minister of Pakistan.

As the outraged PTI workers holding flags chanted slogans against Khan’s ouster, supporters of the Pakistan Muslim League-Nawaz also rushed to the Avenfield flats to show solidarity with their leader.

PTI workers also vowed not to send remittances back home until the party chairman returns to power.

Reports in the local media suggest that PTI also planned to hold a protest outside the US Embassy in London, as they accused the US of toppling the PTI government.

Amid the hullaballoo outside PML-N’s patron's residence, London police sent reinforcements to deflect a clash between workers of two political parties.

PTI supporters protest in favor of Imran Khan at Hyde Park London and against regime change in Pakistan pic.twitter.com/EbU90lWIuq

The development comes a day after Imran Khan was ousted from premiership following a vote of no confidence. The parliamentary vote saw the cricketer turned politician defeated. The NA session took place after Supreme Court ruled a decision to block a previous vote of no confidence against Khan.