ISLAMABAD – The British-Pakistani journalist and ex-wife of Pakistan’s Prime Minister, Reham Khan tendered unconditional apology in the United Kingdom Court for her allegations on Aneel Mussarat – UK based tycoon and close friend of Imran Khan.

In the apology affidavit Reham stated, “I am the operator of Youtube channel Reham Khan official and in a video posted on December 6, 2019, I made reference to Aneel Mussarat and I made a number of comments and insinuations regarding Aneel Mussarat.”

“In seeking to made amends, I have removed the video and I wholly retract my comments and apologise to Mr. Mussarat for any damage or harm which may have been caused to Mr. Mussarat, his businesses, or to the charitable causes he supports. I will not be making any further comment about this matter”, the affidavit added. 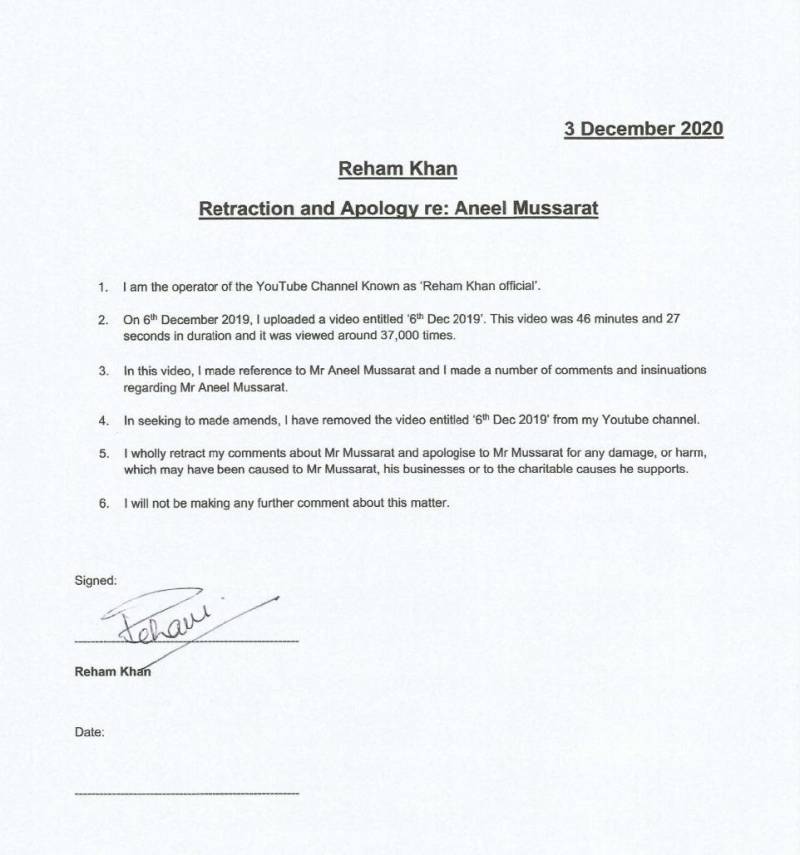 Earlier, Special Assistant to PM Zulfi Bukhari had sued Reham Khan over allegations. The defamation claim relates to a broadcast by Reham Khan on December 6, 2019, on video streaming site YouTube, regarding the possible sale of the Roosevelt Hotel in Manhattan.

Reham alleged Bukhari had a personal interest in the sale of Roosevelt Hotel in Manhattan, owned by the Pakistan International Airlines (PIA). She also tweeted that Pakistan’s national assets were being sold to help people like Bukhari and Aneel Musarrat and called it an act of "robbery.”