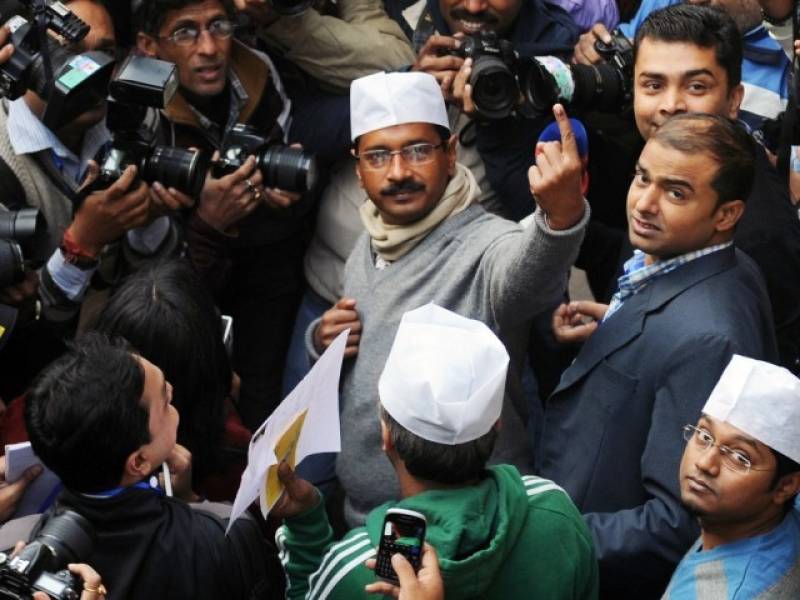 NEW DELHI (Web Desk) - India's Aam Aadmi Party (AAP) has clean swept the polls according to the early results. It bagged 67 seats out 70 leaving the federal ruling party BJP with only three seats and former ruling party Congress with no seat in the New Delhi legislative assembly.

Arvind Kejriwal's Aam Aadmi Party makes one of the most spectacular comebacks in India's electoral history with a landslide 65-14 lead over the BJP according to the trends at 11 am in the Delhi Assembly election.

Kejriwal was leading in the prestigious New Delhi constituency while the BJP's chief ministerial nominee Kiran Bedi was trailing in Krishna Nagar seat, earlier represented by Union minister Dr Harsh Vardhan and considered a traditional stronghold of the party. Congress' Ajay Maken was trailing in the Sadar Bazar seat.

As trends showed AAP's possible victory, Bedi said she will take responsibility if BJP was defeated in the polls. "We (me and Kejriwal) both are competing. We both are playing a match. When we play, only person has to win. If the party wins, it will be a collective victory and if the party loses, I will take the responsibility," Bedi told reporters at her residence.

AAP candidate and former minister Rakhi Bidlan was leading in Mangolpuri constituency in North-West Delhi against her Congress rival Raj Kumar Chouhan. Another former AAP minister Somnath Bharti was ahead in Malviya Nagar constituency in South Delhi over his Congress opponent Yoganand Shastri.

With early leads giving the party a considerable lead, hundreds of AAP supporters broke into celebrations and raised slogans 'Paanch saal Kejriwal'. Every lead projected on the massive LCD screen set up at AAP's East Patel Nagar office was being cheered by supporters.