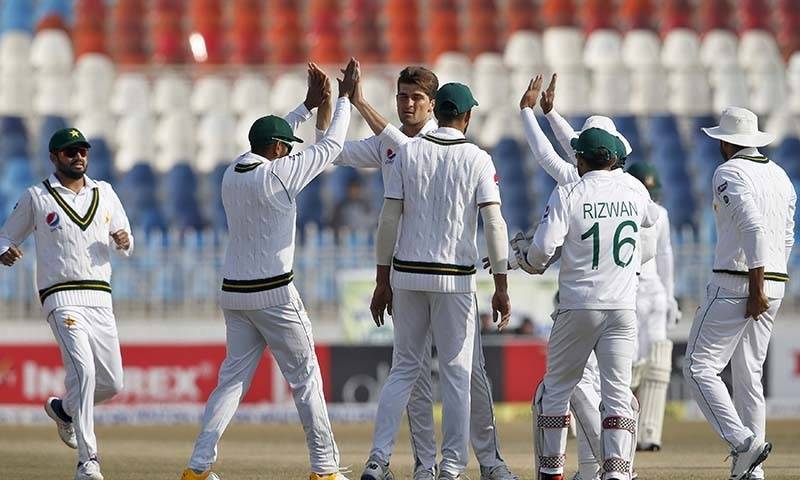 RAWALPINDI - Pakistan on Monday beat Bangladesh by an innings and 44 runs in the first Test at the Rawalpindi Cricket Stadium, leading the two match series.

Bangladesh started the fourth day on 126-6 needing another 86 runs to avoid an innings defeat with two days to play. Mominul Haque and Najumul Hossain Shanto from the visiting team were on the crease as the match opened but Bangladesh players were bowled out in nearly two hours.

Naseem was awarded man of the match for taking four wickets, while Yasir Shah was named player of the match.

The second match will be played from April 5 in Karachi.

On third day of the first Test, Naseem Shah grabbed a world title of becoming the youngest ever player to claim a test hat-trick when he dismissed three Bangladesh batsmen with successive deliveries on Sunday.

Pakistani fast bowler, who turns 17 next week, dismissed Najmul Hossain, Taijul Islam and Mahmudullah as Bangladesh slumped to 124-5 in their second innings.

The host opted to review the umpire’s decision after an lbw appeal against Najmul was turned down and replays confirmed the ball would have hit the stumps.

Taijul also fell lbw and Mahmudullah edged the next ball as Naseem became the fourth Pakistani to claim a test hat-trick after Wasim Akram (twice), Abdul Razzaq and Mohammad Sami.