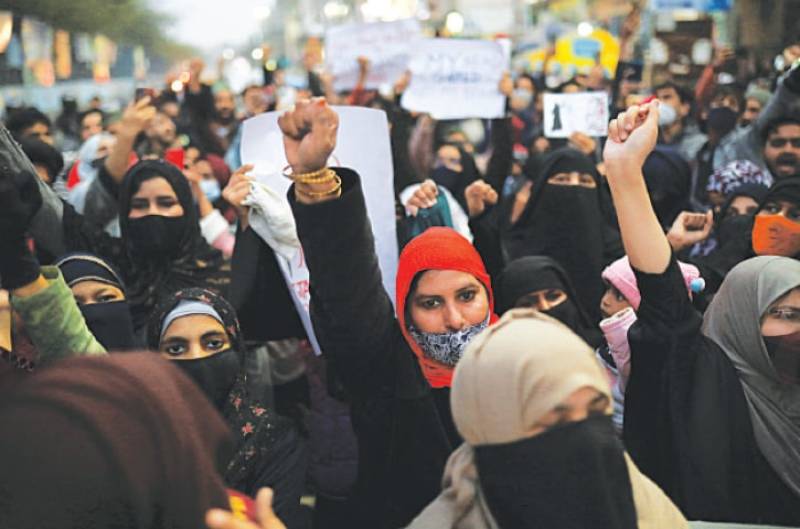 KABUL/KOLKATA – As the row over hijab ban at Indian schools intensifies, Afghanistan's Taliban rulers also came forward with their reaction to the incident wherein an Indian Muslim girl stood defiant against the Hindu extremists who heckled her and jeered at her for wearing hijab to her college.

Inamullah Samangani, deputy spokesperson for the Taliban government in Afghanistan, said in a tweet on Thursday, "Indian Muslim girls struggle for Hijab shows that Hijab is not an Arab, Iranian, Egyptian or Pakistani culture, but an Islamic value for which Muslim girls around the world, especially in the secular world, sacrifice with different types and defend their religious value."

Indian Muslim girls struggle for Hijab shows that Hijab is not an Arab, Iranian, Egyptian or Pakistani culture, but an Islamic value for which Muslim girls around the world, especially in the secular world, sacrifice with different types and defend their religious value.#Muskan pic.twitter.com/VfkNR2qCmb

In India, hundreds of students in the eastern Indian city of Kolkata chanted slogans and blocked roads in protest against the hijab ban imposed by the southern state of Karnataka.

Also, the row has drawn in Pakistan's Malala Yousafzai, the campaigner for girls' education and Nobel Peace Prize laureate, who asked Indian leaders in a tweet to "stop the marginalisation of Muslim women".

Hindu students mounted counter-protests, flocking to schools in recent days in support of the ban, forcing the Karnataka state government to shut schools and colleges for three days to ease tensions between the two communities.

In one incident in a video widely shared online, a lone Muslim student wearing hijab is surrounded by Hindu extremists shouting religious slogans while trying to enter her college in Karnataka.

The protesting students in Kolkata were predominantly women wearing hijabs, an eyewitness said, adding the demonstrations were without incident. The students said they plan to reconvene tomorrow.

"We will keep protesting until the government stops insulting the students," said Tasmeen Sultana, one of the protesters. "We want our fundamental rights back…you cannot take away our rights."

Protests have also been planned on Wednesday in India's capital New Delhi.

"Refusing to let girls go to school in their hijabs is horrifying. Objectification of women persists — for wearing less or more," Yousafzai said in a tweet late on Tuesday.

The government of Karnataka, where 12% of the population is Muslim and which is ruled by Prime Minister Narendra Modi's Hindu nationalist Bharatiya Janata Party (BJP), has said in an order that students should follow dress codes set by schools.

Opposition parties and critics accuse the BJP government at federal and state level of discriminating against the minority Muslim population. Modi has defended his record and says his economic and social policies benefit all Indians.