Qureshi lands in Bucharest in first phase of visit to Romania, Spain 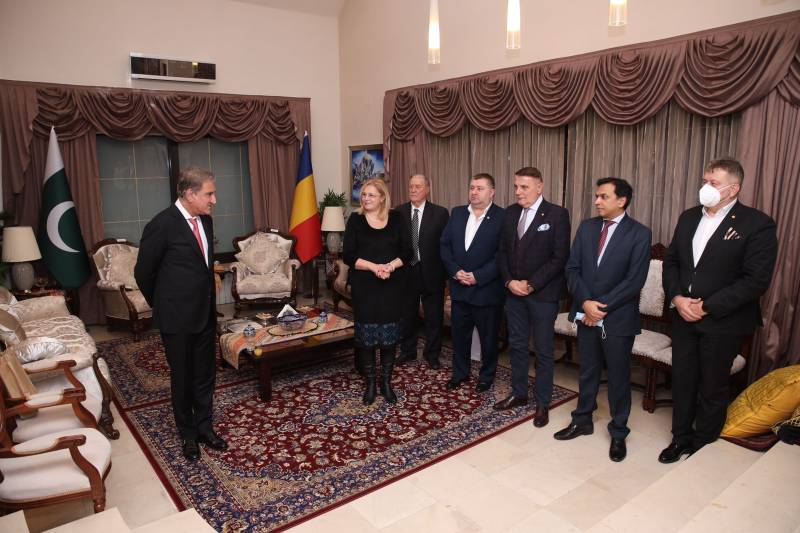 ISLAMABAD – Foreign Minister Shah Mahmood Qureshi, who is on an official visit to Romania and Spain, said Pakistan was determined to expand economic and trade ties with all European Union members, a report of state broadcaster said.

Qureshi while speaking at a dinner hosted by members of the European Parliament and Parliament of Romania, in Bucharest, said the strategic partnership between Pakistan and European Union has now entered the next level.

Pakistan is an emerging market of more than 200 million people, providing immense opportunities for investment, he added.

Pleased to meet our Overseas Pakistanis who serve as an anchor for Pak-Romanian ties as well as Romanian MEPs, parliamentarians, think tank leaders, members of the academia and key business stakeholders, discussing a diversity of matters from economic to socio-political. pic.twitter.com/7zgCqYAHcM

Members of the Parliament of Romania and the European Parliament also expressed their desire to promote economic relations with the South Asian country.

Meanwhile, FM while interacting with the Pakistani community in Romania, said overseas Pakistanis had been given voting rights and now they could participate in the policymaking of the country.

Pakistan was focusing on increasing exports to the European markets, he said, adding that there were immense opportunities to expand ties between Pakistan and Romania.

Good to be in Romania and pleased to inaugurate the Pakistan Cultural & Trade Exhibition Center at @PakinRomania, which will permanently exhibit our export products for greater #economicdiplomacy and serve as a space for events promoting greater #CulturalDiplomacy. pic.twitter.com/MBTmxGgfyy

He also assured speaking to the Romanian counterpart about giving more facilities to Pakistanis living in the southeastern European country.

Qureshi said overseas Pakistanis had opened 300,000 digital accounts and sent $3 billion through them in a short time. The Pakistani diaspora was given facilities so that it could buy houses and cars in Pakistan, he maintained while adding that Pakistani investors could now repatriate their profits earned in Pakistan and were also given exemptions in taxes and duties.

In a similar development, Qureshi during his visit to the Pakistani embassy in Bucharest also inaugurated the Trade and Cultural Exhibition Hall. The hall will be used for holding exhibitions to display and promote goods imported from Pakistan, encouraging tourism and highlighting the soft image of Pakistan.