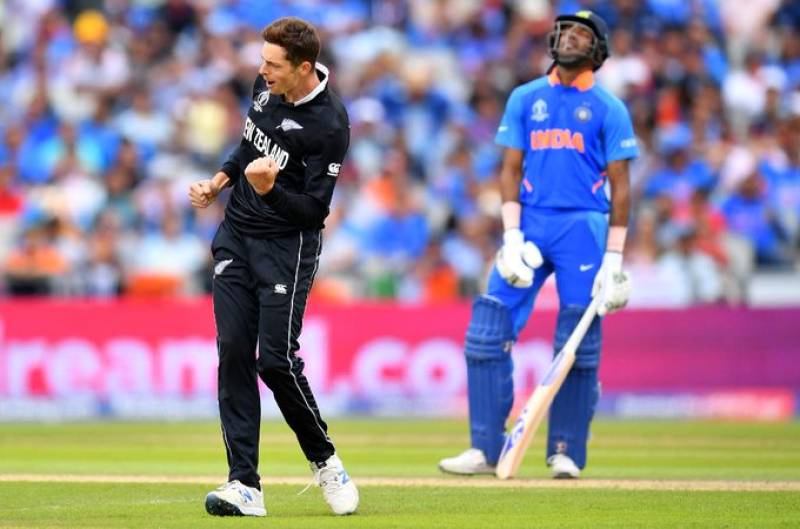 India were chasing the 240-run target, posted by New Zealand in the semi-final at Old Trafford, Manchester.

NEW ZEALAND ARE IN THE WORLD CUP FINAL!

Matt Henry was the pick of the bowlers for New Zealand. He finished his 10 overs with figures three for 37.

Chasing 240 for a place in the final, India were off to a horrific start as they lost their top-three batsmen inside four overs. On the last ball of the 10th over, Dinesh Karthik was also dismissed by Matt Henry thanks to a brilliant catch by James Neesham.

Kane Williamson won the toss and elected to bat. New Zealand were in trouble before their captain and Ross Taylor took them to a fighting total of 239 for eight.

For India, Bhuvneshwar Kumar was clinical with the ball who bagged three wickets for 43 in his 10-over spell. Jasprit Bumrah, Hardik Pandya, Yuzvendra Chahal and Ravindra Jadeja all picked up one wicket each.

Hardik Pandya and MS Dhoni tried to steady the innings but the required run-rate kept increasing that forced Pandya to play a false shot and led to his dismissal. Dhoni then stitched a 100 plus partnership with Ravindra Jadeja but once Jadeja lost his wicket, it was all but over for India.

MS Dhoni was run out by Martin Guptill in the penultimate over that gave New Zealand another World Cup title shot at Lord's on July 14.

SANTNER GETS HIS SECOND!

The pressure had built hugely, and finally Hardik Pandya loses his cool. He skies one, and #KaneWilliamson holds onto the pressure catch.

The Black Caps, who resumed on their overnight score of 211-5 in 46.1 overs after rain halted play on Tuesday, scored 28 in remaining 23 deliveries at Old Trafford.

Skipper Kane Williamson made 67 for New Zealand after they elected to bat first.

Paceman Bhuvneshwar Kumar claimed three wickets as India were left needing 240 to reach the final against England or Australia at Lord´s on July 14.

The second semi-final will be played between England and Australia on Thursday.