The second fixture was earlier scheduled to start at 3 pm. 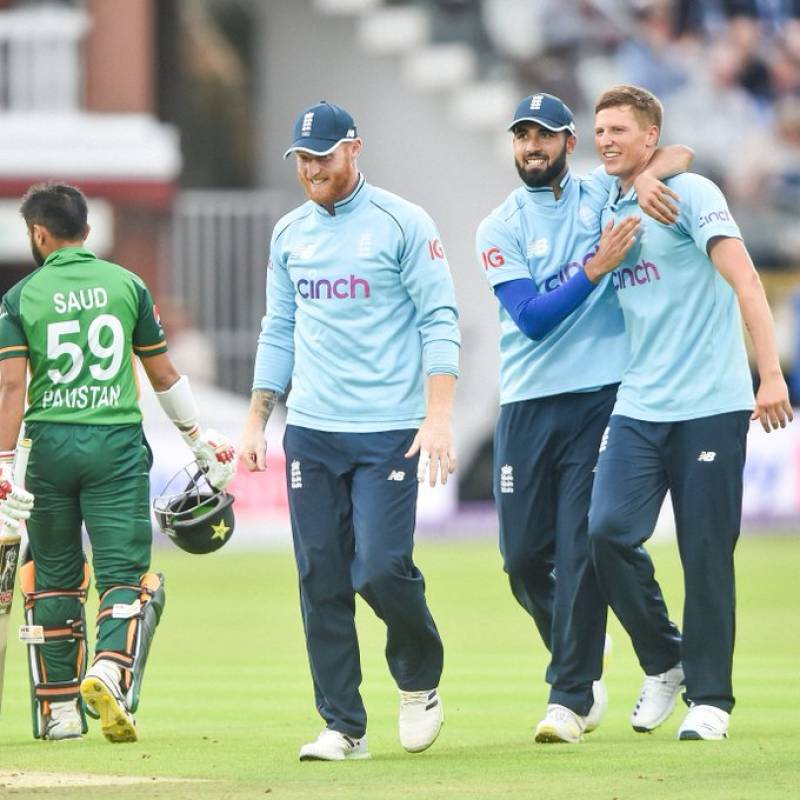 LONDON – The strong bowling lineup helped England go 2-0 up in the three-ODI series against Pakistan with a 52 runs victory at Lord's cricket stadium on Saturday.

The host team removed Green Shirts at 195 in 41 overs as they were attempting to chase down a target of 248 runs.

Pakistan's top batting order comprising Imamul Haq (1), Fakhar Zaman (10), Babar Azam (19) and Mohammad Rizwan (5) failed to make a comeback in the second game of the series. After they were dismissed, newcomer Saud Shakeel tried to help the team achieve the target with his maiden half-century before he was caught out by Overton.

Shadab Khan made 21 runs while Hasan Ali gave all-round display as he scored 31 runs besides his five-wicket haul against England.

Pakistan managed to bowl out England for 247 runs after the former invited hosts to bat first after winning the toss..

Host team's Philip Salt and James Vince made 60 and 56, respectively, while Lewis Grogery scored 47 runs to help the team post a fighting total.

Pakistan bowl out England for 247!

Haris Rauf claimed two wickets while Shaheen Afridi and Shadab Khan took one wicket each as the Pakistani bowling lineup eyes to revenge the defeat in the opening match of the series.

The match has been reduced to 47-overs a side as the pour down delayed the toss which was earlier scheduled for 3 pm.

Babar Azam while speaking about the second game after losing first said “We are fielding the same team that lost and are trying to do our best, use the conditions and win the match.”

Meanwhile, England‘s captain Ben Stokes said they have not made any changes in the squad, adding they would have bowled first, but a good opportunity to go out and put a score on the board.

Earlier, Lord's Cricket Ground official Twitter account tweeted, “It's currently raining at Lord's so the toss has been delayed. Hopefully, it will clear soon.”

It's currently raining at Lord's so the toss has been delayed.

The hosts currently lead the three-match ODI series their thumping victory against the Greens Shirts in the first ODI.

On Thursday, Shaheens faced an embarrassing defeat by England after they were bundled out for 141 in the 36th over. England beat Pakistan by nine wickets in the three-match series. Set at 142-run target, England romped home in the 22nd over courtesy unbeaten half-centuries by Dawid Malan and debutant Zak Crawley.

The two added 120 runs for the second-wicket after Shaheen Shah Afridi had dismissed Malan’s opening partner Phil Salt for seven runs. Malan struck eight fours in his 68 off 69 balls. The right-handed Crawley hit seven fours in his 58-run effort off 50 balls.

Earlier, team Green was bowled out for 141 runs in 35.2 overs after England captain Ben Stokes won the toss and decided to bowl first.

Pakistan captain Babar Azam has the perfect message for his team: "Ghabrana Nahi Hai" after the humiliating defeat ...

Opener Imam-ul-Haq was dismissed lbw by pacer Saqib Mahmood on the first ball of the match. Skipper Babar Azam was also dismissed for a duck two balls later as Pakistan slipped to zero for two after the first three balls of the match.

The tourists lost wickets at regular intervals with Fakhar Zaman the only one to offer some sustained resistance. The left-hander scored 47 off 67 balls (six fours). Shadab Khan contributed 30 off 43 balls. Sohaib Maqsood who was making a comeback to the national side after five years scored 19 off 32 before an unfortunate run-out dismissal.

For England, Saqib took four wickets for 42 runs in 10 overs. Craig Overton and Matt Parkinson took two wickets each. The second ODI will be played at Lord’s on Saturday, 10 July.

CARDIFF – With an impressive performance by both batting and bowling lineup, England on Thursday trounced ...