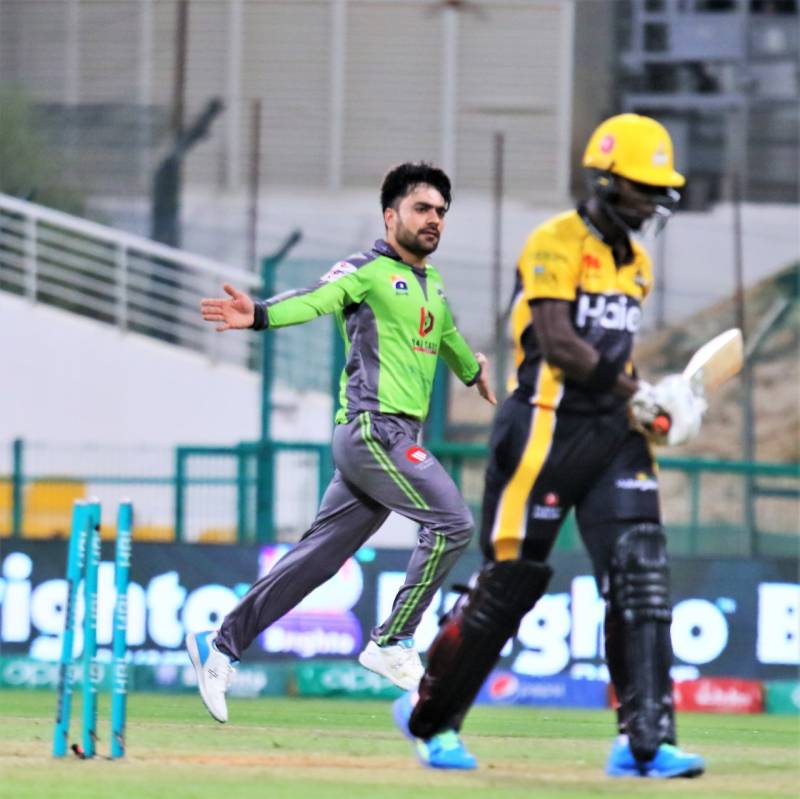 ABU DHABI – A first five-wicket haul in franchise T20 cricket for Rashid Khan after Tim David's 64 not out saw Lahore Qalandars standing victorious over Peshawar Zalmi in at Abu Dhabi on Thursday night.

Also, Haris Rauf completed 100 T20 wickets, reaching the milestone in 71st game of his T20 career. He had got his first wicket at same venue, during Abu Dhabi T20 in 2018.

Skipper Sohail Akhtar and Fakhar Zaman opened the innings for Qalandars, while Wahab Riaz bowled the first over for Zalmi and removed Zaman for one on the fifth ball of his over.

After some early dismissals, Singapore's Tim David and Australia's Ben Dunk tried to consolidate the Qalandars' innings. Their 81-run partnership put the struggling Qalandars on a stable path.

Earlier, Peshawar Zalmi won the toss and decided to field first against Lahore Qalandars in the 17th match of the Pakistan Super League (PSL)’s sixth edition at the Sheikh Zayed stadium in Abu Dhabi.

Qalandars will look to continue their winning run in the second half of the tournament as they won their last match against Islamabad United by five wickets on Wednesday.

They’re also on top of the table with four wins from five games while Zalmi have tasted victory in three of their initial five encounters.

Wahab Riaz’s side was outclassed by Lahore Qalandars when the two teams met each other in first leg of the tournament in Karachi on February 21.

Zalmi are also without their leading bowler, Saqib Mehmood, who had taken 12 wickets in the first leg of the tournament. However, the availability of David Miller will surely boost the confidence of Darren Sammy, who is now the coach of the side.

Qalandars seemed to have gathered momentum after their win in Abu Dhabi on the first night of action. They’ll hope for a repeat of the same performance from Rashid Khan, who displayed an all-round act to help his side beat the former champions.