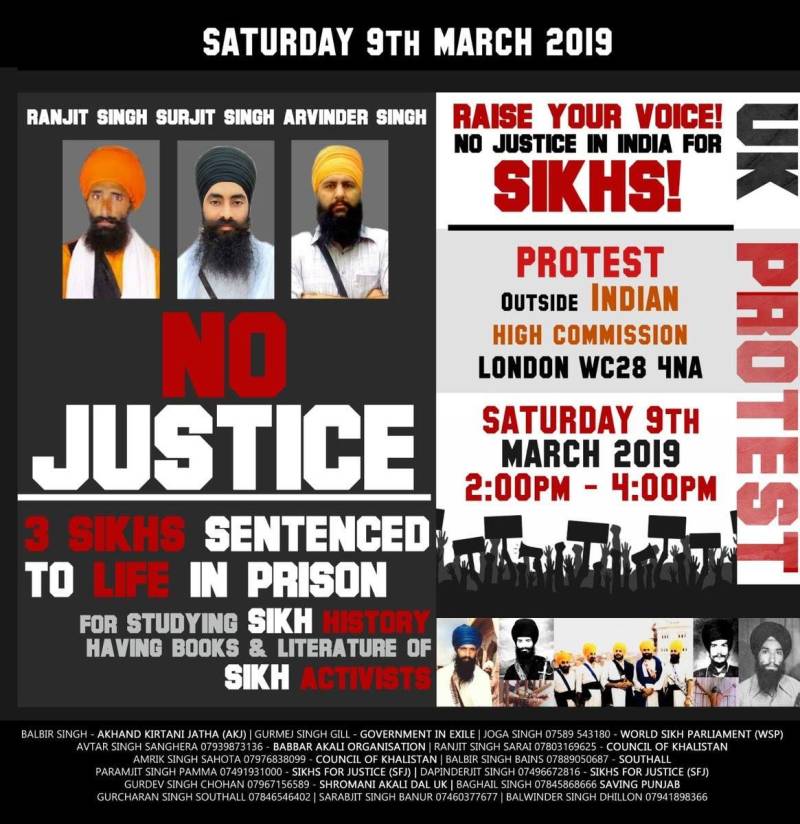 LONDON - The activists of Sikh for Justice on Saturday afternoon held a big demonstration against India and Prime Minister Narendra Modi's warmongering policies.

The protesters were urging India to stop human rights violations and killings of innocent Kashmiris in Indian occupied Kashmir, grant right of self-determination to the people of Jammu and Kashmir and freedom to Sikh as Khalistan their independent state.

In this connection, a large number of protesters including Kashmiris, Sikhs, Dalits, women’s groups and human rights activists gathered outside Indian House and chanted slogans against India and Modi government.

Clash outside Indian High Commission in London as a large number of Sikhs and Kashmiris protest against Indian oppression: police arrived after protesters attacked by a pro-BJP group pic.twitter.com/bKSJuD3KJW

The focus of the demonstrations was Narendra Modi, whose extreme Hindu right-wing government was trying to turn India into an exclusively Hindu state run by upper caste Hindus at the cost of minorities.

The participants were carrying placards inscribing slogans like India must stop Kashmir holocaust, India must end violence in occupied Kashmir, Modi the face of terrorism, Grant right of self-determination to people of Jammu and Kashmir, Narendra Modi was a terrorist, who supported acts of terror against Sikhs, Kashmiris, Dalits, women, and children. Protesters also chanted “Modi go back”, Sikh and Kashmiris want freedom from Indian subjugation, Kashmir movement Zindabad, “Khalistan Zindabad,” “Khalistan is our dream and our birthright”.

“Kashmiris want justice”, “Modi go home,” “We stand against Modi’s agenda of hate and greed,” and “Kashmiris want freedom from India,” “Stop gross violation of human rights in occupied Kashmir,” and “Indian troops get out of Kashmir.”

Talking to APP Pakistan Tehreek Insaf (PTI) President for greater London Chaudhry Dilpazeer said that India was involved in the gross violation of human rights in Indian occupied Kashmir. He demanded that India must end violence in IOK immediately and grant the right of self-determination to people of Jammu and Kashmir under UN Security Council resolutions.

The leader of Sikh for Justice Manpreet Sing said that Kashmiris and Sikh have become the oppressed community of India as their right to freedom had been subdued by India through the use of force.

The Sikh leader said that recently three innocent Sikhs were sentenced for life imprisonment just for possessing the Khalistan literature.

He said that the Sikh community fully support the right of self-determination to the people of Kashmir. UK Councilor Liaqat Ali MBE, JP on the occasion said that there should be no more killings in IOK. He demanded that India must comply with United Nations Security Council (UNSC) resolutions on Kashmir and grant right of self-determination to the people of Jammu and Kashmir for peace in the region.

Modi goons tried to sabotage the protest in favour of #kashmir and #Khalistan, badly beaten by sikhs and muslim in London ?

He strongly condemned the recent Indian aggression against Pakistan despite peace offer made by Pakistan.

Amjad Hussain of OPWC also demanded the immediate end to gross violation of human rights in IoK and grant of the right of self-determination to people of Kashmir under UNSC resolutions on Kashmir. He said that war is no solution to any problem and India must realize it and come on negotiating table for talks with Pakistan for the resolution the core issue of Kashmir peacefully.

He lauded the Pakistani government for an offer of talks to resolve issues including Kashmir problem peacefully to ensure prosperity in the region.