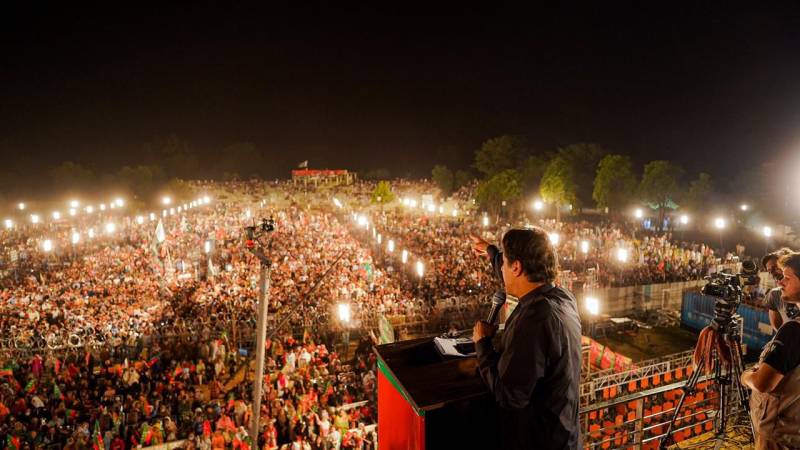 “Shehbaz Sharif is real Mir Jaffar and Mir Sadiq who is installed as the prime minister through a foreign conspiracy,” he said while addressing a public gathering in Jhelum on Tuesday night.

The Jhelum public meeting was part of his party’s drive to mobilise the public and strengthen his stance that he was ousted from power through a US-backed foreign conspiracy.

Khan was responding to allegations that his narrative was against state institutions. He has been accused of targeting the military, albeit in a subtle manner.

In his public rally on Sunday in Abbottabad, the PTI chairman once again said “only animals were neutral”.

The deposed premier on multiple occasions has also narrated his version of the sub-continent’s history saying Sirajud Daula was a governor of the Mughal emperor whose sipah-e-salaar (commander-in-chief) Mir Jaffar colluded with the English to topple the government. He repeated this tale on Sunday’s Abbottabad show as well as today’s rally in the Punjab town.

The remarks prompted a response from Prime Minister Shehbaz Sharif, saying that Imran’s speech was “a grand conspiracy against Pakistan” and its institutions.

The premier’s statement came on the heels of military spokesperson’s statement warning politicians, journalists and analysts against dragging Pakistan Army and its leadership in the country’s political affairs, saying that the practice is “extremely damaging”.

The former PM planned to hold six power shows after Eid and the first rally was held in Mianwali on May 6 after which the cricketer turned politician was blamed for inciting the masses against the state institutions.

Khan earlier released a special message to the Jhelum residents ahead of his power show. He termed Jhelum the city of martyrs and ghazis, saying I am coming to Punjab city to prepare everyone for ‘real independence’.

PTI Chief said an imported government is imposed on us via 'foreign conspiracy' which is unacceptable for all Pakistanis.

The former PM also announced to respond to the allegations of contempt of institutions in today’s rally. Addressing the party leaders in the federal capital, Khan again lashed out at the opposition party leaders.

Earlier, National Assembly passed a resolution, condemning the recent statements issued by PTI Chairman in which he criticized the state institutions.

The former ruling party has planned to bring millions to the country’s federal capital Islamabad for a long march against the Sharif-led government. Khan earlier called on activists and supporters to march toward Islamabad in the last week of May.

ISLAMABAD – Tens of thousands charged PTI supporters staged protest in various cities across the country against ...