US media highlights cancellation of Ghulam Ali's concerts in India 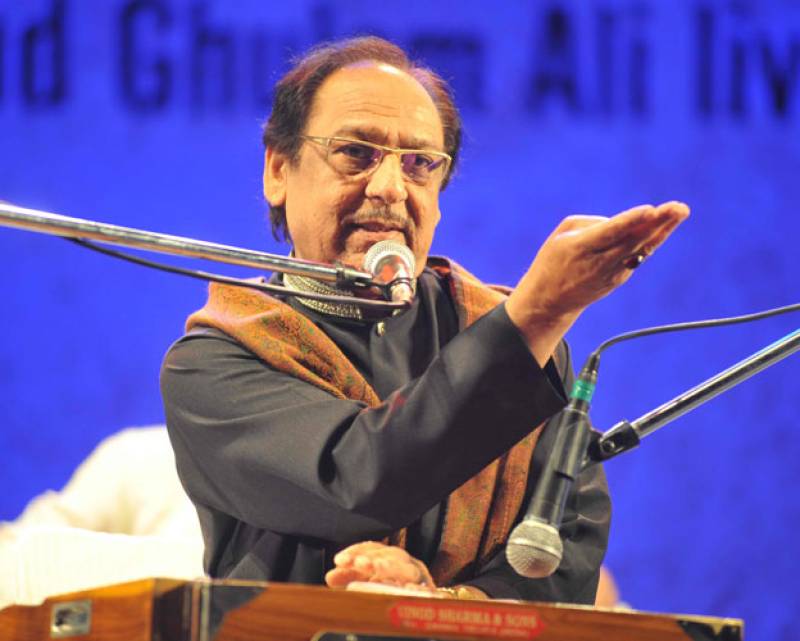 NEW YORK (Staff Report) "I am not angry, I am hurt," US print and electronic media quoted Pakistani ghazal maestro Ghulam Ali as saying after the cancellation of two of his concerts in India that resulted from threats by Shiv Sena Hindu nationalists.

We came here to share love, Mr. Ali, 75, said, adding, "The atmosphere is not conducive for me to perform." "With its muscular brand of hard-line politics and the sometimes violent protests by its followers, the Shiv Sena has long been a powerful, and feared, presence in Mumbai, the Maharashtra state capital," The New York Times wrote. "Fearing a disruption of Mr. Alis concert, Leo Fernandis, the manager of the venue in Mumbai, Shanmukhananda Hall, said he had asked the organizers to contact the Shiv Sena to reach an agreement, or else the show would be cancelled."

The concerts were scheduled for Friday and Saturday in the cities of Mumbai and Pune. At a news conference in Mumbai on Thursday, Aditya Thackeray, the leader of the Shiv Sena, made it clear that the party objected to the events simply because of Ghulam Ali's nationality.

"The migration of political hostilities to the cultural arena is not an entirely new phenomenon cricket tournaments between the two have been called off several times because of tensions," the Times said.

But it called the cancellation of Ghulam Alis events as "notable because he has held many concerts in India over the decades, and he remains very popular here.

Last year, Mr. Ali performed without incident in Mumbai to an almost full house at Shanmukhananda Hall, which has a capacity of just under 3,000."

"In April," the paper said, "Mr. Ali performed at a music festival at a famous Hindu temple in the holy city of Varanasi, in Uttar Pradesh State, and paid tribute to a celebrated Indian musician, Bismillah Khan."

The Maharashtra government had promised security for the concerts this week but that assurance was not enough for the organizers or venue owners, it said. â€œYou know the Shiv Sena people, Fernandis, the manager of Shanmukhananda Hall, was quoted as saying.They may throw stones, create other troubles for the show.

Representatives of Panache Media, the Indian company that had organized the events, decided to call off the performances after meeting with Shiv Sena officials, the Times said.

You can enjoy the music only in relaxed atmosphere, Randhir Ranjan Roy, Panache Medias business development manager, was quoted as saying. Regarding Shiv Sena, he said They are not against Ghulam Ali, but they are against Pakistan.

Pakistan High Commissioner to India Abdul Basit said he regretted the decision. "Our position is very clear, we encourage people-to-people contacts, we encourage our artists to visit both sides and perform," he said.