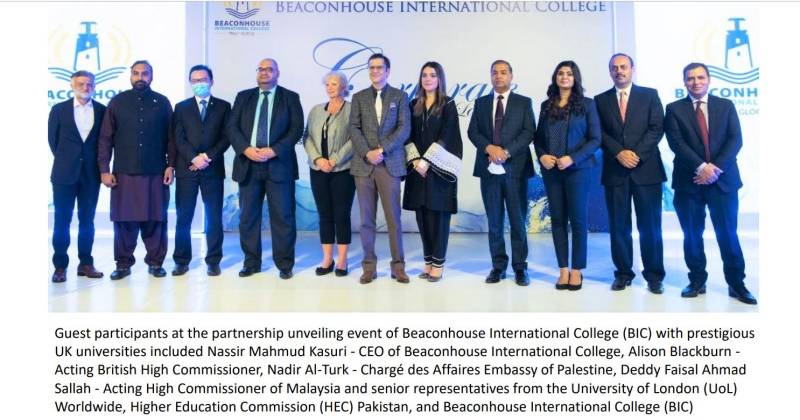 As a truly international organisation, Beaconhouse International College has forged successful partnerships with leading UK universities including Liverpool John Moores University, University of London (UOL), and Pearson UK to introduce programs in Engineering, Business, Social Sciences, Humanities, and Law. Students at BIC will also have the option of transferring to their respective universities in the UK to complete their degrees.

Additionally, the Higher Education Commission (HEC) of Pakistan will recognise international engineering degrees studied locally in the fields of electrical and electronics as well as mechanical engineering for the first time – which will be an exclusively held distinction by BIC.

While speaking at the event, Her Excellency Ms. Alison Blackburn, Acting British High Commissioner said, “The UK government is committed to supporting the growth of international partnerships and collaboration in education and looks forward to continuing to welcome students from Pakistan to study, both in the UK and through enrolment in programs delivered in partnership with institutions in Pakistan.”

Nassir Mahmud Kasuri, CEO of Beaconhouse International College, said in his opening remarks, “By partnering with some of the UK's leading institutions, we have synthesised their knowledge with our 45 years of local experience to deliver programs uniquely suited to Pakistani students, which also allow them to compete at the highest levels internationally.”

“The Liverpool Mechanics Institute opened in 1825,” stated Mark Power, Vice-Chancellor and Chief Executive of Liverpool John Moores University (LJMU), “and nearly 200 years later, these institutions evolved to become the modern-day School of Engineering at Liverpool John Moores University, which is now working with Beaconhouse International College to offer it is electrical and electronics and mechanical engineering degrees in Pakistan.”

Jane Baker, Vice President, Higher Education Qualifications, Pearson UK, noted that Beaconhouse is famous for providing a modern, holistic and innovative learning experience. “We are confident that together both Pearson and Beaconhouse will impart the skills required to the youth to excel in their lives and help into the prosperity of Pakistan.”

Saad Wasim, Regional Advisor South Asia, University of London Worldwide, said, ''It is surely a great day for Pakistan to have some of the best universities offer their degrees through Beaconhouse International College in Pakistan.” He also highlighted, ‘’It seems like a dream come true, I could never have thought that an engineering program of a foreign university could ever come to Pakistan.’’

According to Raana Sarmad, Country General Manager BIC, “The greatest advantage of transnational education is that students can enjoy modern world-class education and a foreign degree at a fraction of the cost of studying abroad. Students at BIC also have the option of transferring to the UK University to complete their degrees.”