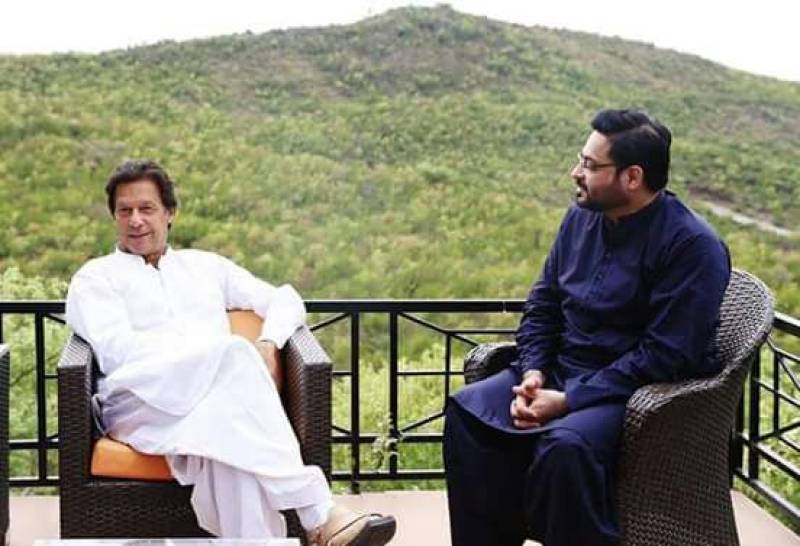 Hussain, who had been a member of Altaf Hussain-led Muttahida Qaumi Movement (MQM), took to Twitter on Friday, stating he fell in " Ishq" (love) with his new political master.

He shared a picture with the PTI leader with a caption, that shows intensity of his emotions for the Khan, saying “Ishq ka irada hargizz na tha  Bakhuda hogya dekhtay dekhtay”.

As the TV personality shared the post, it has taken Twitter by storm as people expressed their views in which some users took Hussain's love for Khan as "natural" while some called them "love birds".

The Twitterati also said that Hussain should not parted ways with the PTI as he had been made in the past.

A user asked Hussain whether he was trying to snatch the place from "Pinki," a nickname of Khan's wife, Bushra.

A user, who on one side praised Khan,  called Aamir Liaquat "most diplomatic person ever".

Khan sahab is great but you’re the most diplomatic person ever. you don’t deserve to be a part of PTI. Period.

A user who appears to be a supporter of PTI chief advised Imran Khan to keep away from Amir Liaquat.

Imran Khan had to face severe criticism when Liaquat joined PTI. Khan in his remarks over the entry of the TV personality said, “I welcome Aamir Liaquat on joining PTI. Our party needed Amir Liaquat,” adding that he was surprised at the media’s interest in Aamir Liaquat joining his party. “The People of Karachi should give PTI an opportunity to bring a change in the city. Give us a chance to serve you,” Imran Khan said.

Hussain had parted ways with the MQM after a brief detention at Rangers headquarters in August 2016. He was detained along with nine other MQM leaders after party workers attacked media houses following the party’s supremo Altaf Hussain’s ‘anti-Pakistan’ speech.

Speaking to the media the following day, Aamir said he was fed up with the party and the way it functioned and also announced that he was leaving politics for good.