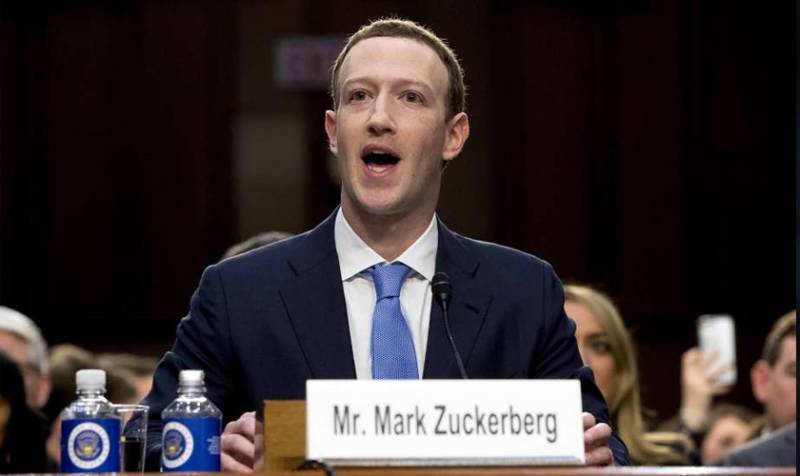 WASHINGTON - As Pakistan gears up for upcoming election season, Facebook chief executive Mark Zuckerburg expressed fear that fake accounts could affect the process, adding that protecting the integrity of elections was the top priority of the company.

Zuckerberg stated this during his first of two hearings before Congress on Tuesday while responding to questions regarding the harvesting of around 87 million Facebook users' data by Cambridge Analytica, a political consulting firm that had run Donald Trump's presidential campaign in 2016, The News reported.

The 33-year-old owner said, “2018 is an incredibly important year for elections not just with the US midterms, but around the world. There are important elections in India, in Brazil, in Mexico, in Pakistan, and in Hungary”.

He added, “We want to make sure we do everything we can to protect the integrity of those elections.”

Confident Zuckerberg said that the company has new artificial intelligence tools to identify the bogus accounts and revealed that the social networking giant was going to hire more 20,000 workers to ensure security and review the content by the end of this year.

Referring to recent elections in Germany, France, and Albaman, the Facebook owner said, “I have more confidence we’ll get this right because since the 2016 election, there have been several important elections around the world where we’ve had a better track record”.

“Between those three elections, we were able to proactively remove tens of thousands of accounts before they could contribute significant harm,” he added.

Talking about the data breach, the chief executive in his opening remarks said accepted responsibility for the social network’s failure to protect data of its users and manipulation of the platform that apparently helped Donald Trump occupy the Oval office in 2016.

It was disclosed that Russians under fake names used the social network to try to influence US voters in the months before and after the 2016 election.

In February, US Special Counsel Robert Mueller charged 13 Russians and three Russian companies with interfering in the election through social media.

“We didn’t take a broad enough view of our responsibility, and that was a big mistake. It was my mistake, and I’m sorry,” Zuckerberg said.

“I started Facebook, I run it, and I’m responsible for what happens here.”

Zuckerberg also called Facebook “an idealistic and optimistic company,” adding, “We focused on all the good that connecting people can bring.”

Besides, he acknowledged: “it’s clear now that we didn’t do enough to prevent these tools from being used for harm as well. That goes for fake news, foreign interference in elections, and hate speech, as well as developers and data privacy.”

The social networking giant has faced flak in recent weeks after it was revealed by one of the whistleblowers that political consulting firm Cambridge Analytica, which worked for Donald Trump’s presidential campaign, gained access to the personal data of 50 million Facebook users, though the social network recently confirmed that the victims might be over 87 million.

The scandal hit the headlines and Facebook on March 17, with the firm facing a loss over $70 billion in the market in just ten days.