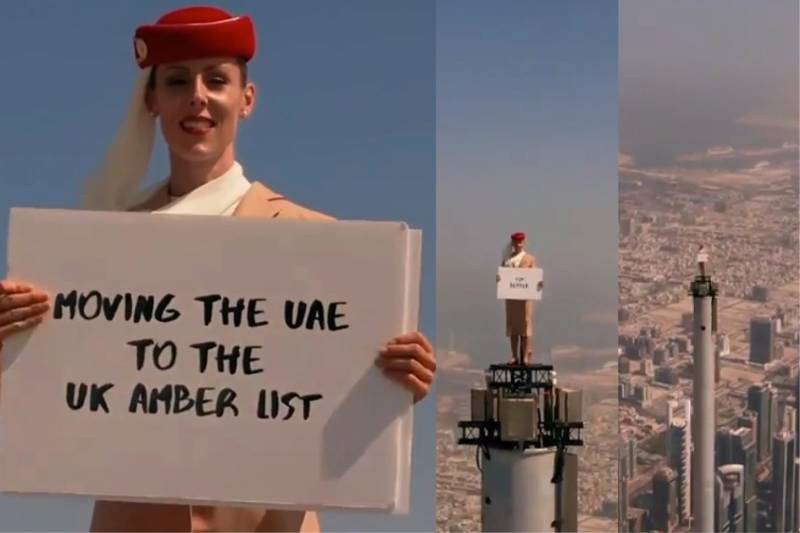 DUBAI – Emirates, the flag carrier of the United Arab Emirates, has recently occupied the top spot on the trends list after a woman was spotted standing on top of the world’s tallest building.

The 30-second advertisement by Dubai-based airline comes after UAE was taken off the red list and upgraded to the amber list in the UK and the clip has gone viral.

Following the hype, it was revealed that the woman standing atop is Nicole Smith-Ludvik, a professional skydiving instructor, who featured as an Emirates cabin crew member in the stunning advert.

In the starting of the clip, the woman, donning Emirates uniform, is seen holding up message boards that read, ‘Moving the UAE to the UK Amber list has made us feel on top of the world. Fly Emirates. Fly better.’

The camera closely focused on the woman while as the camera zoomed out, the cabin crew is actually standing on the top of Burj Khalifa with a spectacular view of Dubai's skyline in the background.

In the meantime, the airline also shared a short clip that depicted how the epic ad was filmed at a great elevation. The BTS video was meant to clarify that the ad was not filmed on any green screen or with the help of special effects but it was filmed in old school style.

In the clip, it was demonstrated that how the ad was shot on the world's tallest skyscraper. The crew surrounding the woman attaching safety ropes can be seen as the clip also depicted all safety measures.

The starred woman, who is a world traveler, skydiver, yoga instructor, hiker, and adventurer, also shared the clip on Instagram. “This is, without a doubt, one of the most amazing and exciting stunts I've ever done. A big shout out to Emirates Airlines for your creative marketing idea! It was a pleasure being a part of the team”, she captioned the post.