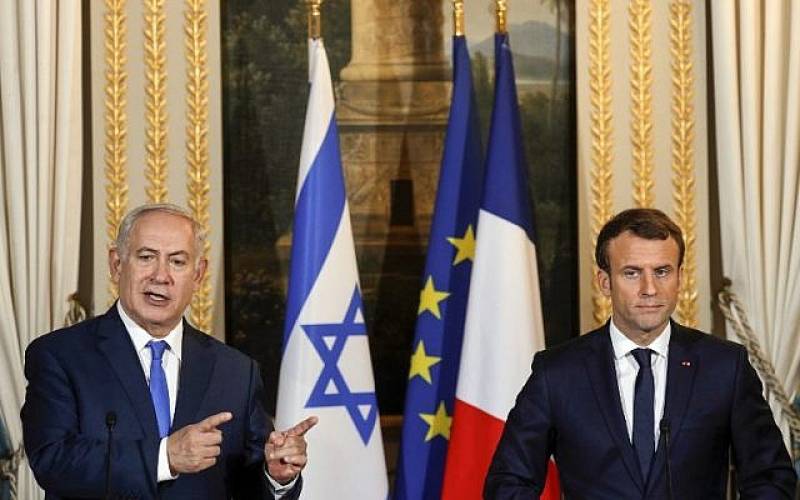 PARIS - French President Emmanuel Macron disapproved US President Donald Trump's recognition of Jerusalem as Israel's capital terming it 'contrary to international law and dangerous to peace' and calling upon  Israel's and Palestinian leaders to devise peaceful end to the conflict.

Macron met Israel's Prime Minister Benjamin Netanyahu on Sunday and urged him to freeze settlement building and initiate confidence building measures with regard to the Palestinian authority saying POTUS decision was 'unilateral'.

Detailing the discussion in front of newsmen, he had with the visiting Israel's dignitary, Macron pointed to the necessity that Tel Aviv freezes settlements to send message of confidence to Palestinians in a bid to resume talks and 'break the current stalemate.'

French President Emmanuel Macron told Benjamin Netanyahu to give the peace process in the Middle East a chance by taking 'courageous gestures' toward Palestinians to end the deadlock.

'France remains convinced that the only solution is to allow the establishment of two states living side by side in peace and that this can emerge through negotiation,' said Macron in a joint press talk alongside Israel's premier.

The French president said he wants to wait for a potential US arbitration in future and would only support an initiative that would be acceptable by Israelis, Palestinians and other parties in the region.

The Israeli Prime Minister Benjamin Netanyahu also expressed his views after the meeting with Macron and conditioned peace talks with the recognition of Jerusalem as Israel's capital.

'Peace (talks) will progress if the Palestinians recognize the reality of Jerusalem as the capital of Israel. The most important thing about peace is first of all to recognize that the other side has a right to exist. If Palestinian Authority President Mahmoud Abbas wants peace, then he comes and sits down and negotiates with Israel,' he declared.

'Where else is the capital of Israel but Jerusalem?' the prime minister asked at the press conference, noting that Israel’s government and courts were located in the holy city.

Netanyahu also expressed dismay over remarks of Turkish President adding that he would not take any lectures from Tayyip Erdogan, who censured Israel over the weekend.

'Mr Erdogan has attacked Israel. I’m not used to receiving lectures about morality from a leader who bombs Kurdish villages in his native Turkey, who jails journalists, helps Iran go around international sanctions and who helps terrorists, including in Gaza, kill innocent people,' Neta­nyahu said.