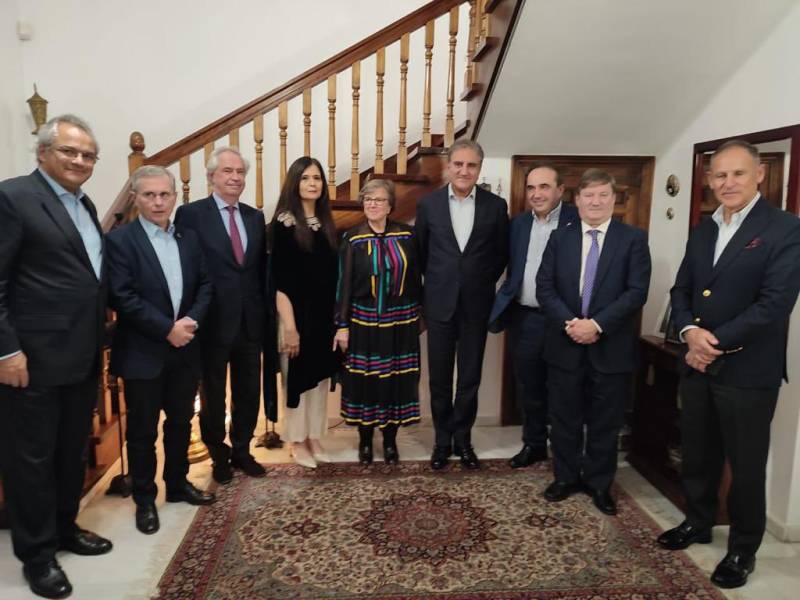 MADRID – Foreign Minister Shah Mahmood Qureshi has arrived on an official visit to Spain at the invitation of his counterpart José Manuel Albares Bueno.

Pakistani envoy to Spain, Shujaat Rathore, and Ministry of Foreign Affairs’ officials welcomed the Qureshi upon his arrival. Foreign Minister will hold meetings with his Spanish counterpart, Ministers, and Members of the Spanish Parliament.

He expressed these views during a banquet he had hosted in honor of think tanks at Pakistan House in Madrid.#APPNews @PakinSpain_ pic.twitter.com/UcxmnuQ6o9

Speaking at Pakistan House in Madrid, Qureshi said “Pakistani government, under its policy of economic diplomacy, is working on attracting the world's attention towards the country's rising market of 200 million population and the investment and trade opportunities in here”.

Islamabad regards Madrid as among key countries in both bilateral and European Union contexts and that there are numerous opportunities for both countries to bolster bilateral trade and economic cooperation. Qureshi also reiterated that Pakistan is continuing its utmost efforts for peace in Kabul and the region.

Pakistan and Spain celebrated the 70th anniversary of the establishment of diplomatic relations and a large Pakistani diaspora in Spain serves as a strong bridge between the two countries.

ISLAMABAD – Romanian Prime Minister Nicolae Ciuca has appreciated Pakistan for its role in the context of the ...

Earlier on his first leg of the tour, Pakistani FM called on Romanian Prime Minister Nicolae Ciuca and discussed bilateral matters, the situation in Afghanistan, and the human rights abuses in the Indian-occupied Jammu and Kashmir (IIOJK).

Qureshi conveyed good wishes from Prime Minister Imran Khan and highlighted the historic and cordial ties between the two countries. He told the Romanian PM that Pakistan desired to establish broad-based and result-oriented ties with his country and the current improvement of the bilateral relations manifested the vision of the two leaderships.

ISLAMABAD – Foreign Minister Shah Mahmood Qureshi, who is on an official visit to Romania and Spain, said ...