Iqra Aziz reacts to criticism for public proposal at LSA2019 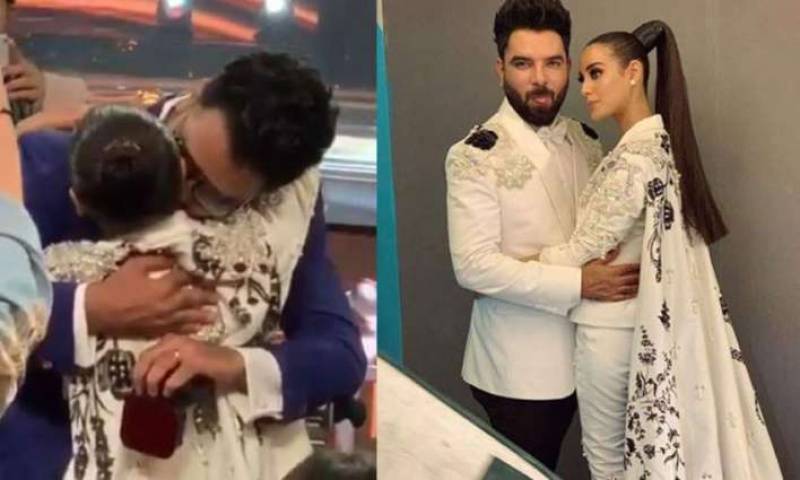 KARACHI - Pakistani TV stars Iqra Aziz and Yasir Hussain have been the talk of the town after they both got engaged publically during the Lux Style Awards 2019 in Karachi last week.

Iqra and Yasir's PDA at the LSA 2019 had sparked off some major controversy. The grand proposal triggered many, and everyone from their fellow celebrities to their fans is talking about them.

Responding to the criticism, the Sunu Chanda girl shared an elaborated post on her Instagram handle along with a picture of her engagement ring in which she has conveyed a bold message to all the trollers and people passing negative comments to the newly engaged couple.

Iqra stated that “Meri yeh khushi itni bari hai k mujhe sirf achi baatein aur duaein sunayi derahi hain [This joy of mine is so huge, that only good wishes and prayers are the only things that are audible to me],” she stated. “Love is to express, not to impress, My man expressed his love in front of the world which takes a lot of guts and i am blissful you’r my ZING. Thankyou for being so expressive, generous, caring, loving, chivalrous, realistic and nobleI love you...X".

Clearing her viewpoint further, the 21 years old starlet contined saying that “To whom it may concern: Agr larki proposal k waqt roti nahi balky ek khushi k lamhe ko hans kar enjoy karti hai tou yeh nahi kehte k planned tha. [If a girl during her proposal chooses to enjoy the moment with laughter instead of shedding tears, one is not supposed to say that all of this was planned]. Rung main bhung na daalein aur apni khushi ka intezaar karein. SHUKRIYA [Do not rain on someone’s parade and wait for your happy days to come].”

Meri yeh khushi itni bari hai k mujhe sirf achi baatein aur duaein sunayi derahi hain🌸 Love is to express, not to impress💕 My man expressed his love in front of the world which takes a lot of guts and i am blissful🕺🏻you’r my ZING👯‍♀️ Thankyou for being so expressive, generous, caring, loving, chivalrous, realistic and noble♥️ I love you...X . . . .

During the grand event in Karachi, Yasir Hussain had unexpectedly gone all-out with a very public declaration of love! He got down on one knee and popped the question to Iqra Aziz onstage at the Lux Style Awards.

The crowd cheered for the lovebirds as Yasir proposed to his lady love. And she said yes! A video of the two embracing each other after his proposal has been doing the rounds on the internet and getting mix reactions by the public.

What is your say on Iqra Aziz's statement? Let us know too.