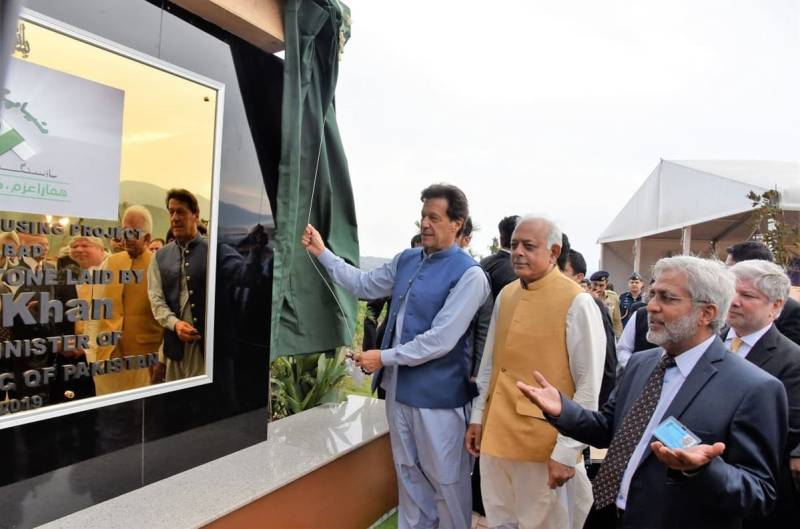 ISLAMABAD - Prime Minister Imran Khan Thursday laid the foundation of a mega project in Islamabad to build 18,500 housing units, mainly for the low-income group as part of his government’s dream to construct five million houses across the country.

Addressing the ceremony, the prime minister said out of 18,500 units to be built in Zone-IV of the federal capital, 10,000 would be specified for the low-income group, who would be enabled to own a house through easy banking loans.

The prime minister said the government's role would be confined to facilitation as well as provision of land to the private contractors, who would execute the project as the government had not sufficient resources to fund such a huge project.

He said through necessary legislation, the government would ensure to control the prices of housing units so that a salaried person or any other from the low-income group could afford them easily.

The prime minister, who earlier unveiled the plaque to launch work on the housing project, said it would take another one and a half years to complete.

The premier said in Karachi, around 30 to 40 percent people lived in slums having neither any ownership rights nor the amenities like sewerage and others. For the Singh metropolis, the government would offer around half of the slums land to the private parties for construction of commercial areas and build reasonable houses for the slum dwellers on rest of the portion.

The prime minister told the gathering that in the federal capital too, the government was planning to build such units for the slum dwellers for what it had identified two sectors. Such experiments had already stood successful in Mumbai, Turkey and Malaysia, he added.

He said in Pakistan, the poor people could not afford their own houses mainly because the banks did not provide them mortgage facility. The government was in the process of promulgating new laws to make the banks extend housing loans to the poor that had so far been available only to the rich class, he added.

He said in Malaysia, the housing loans ratio stood at around 10 percent and 80 to 90 percent in the United Kingdom and the United States, but in Pakistan it was far below at just 0.2 percent pro-rich bank loans facility.

The prime minister said the government was also struggling to bring in foreign investors in the housing sector and reiterated his resolve to accomplish the task of five million houses in the country to bridge the housing shortage and make the poor people own their own house.

The ceremony was also attended by Minister for Aviation Ghulam Sarwar Khan, Senator Faisal Javed and Member of the National Assembly Asad Umar, besides a huge number of people, most of them came there with the hope of their dream for owning a house in the federal capital getting true.