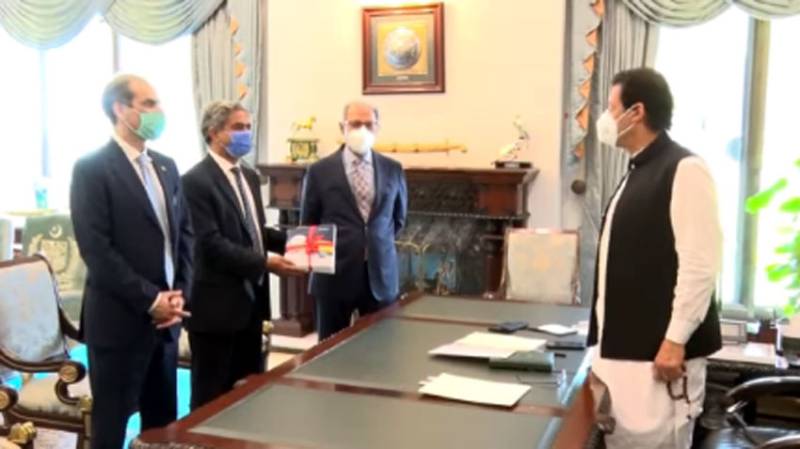 ISLAMABAD – Prime Minister Imran Khan on Thursday was presented Economic Survey 2019-20 as the government is all set to announce the federal budget for the next fiscal year on Friday.

The survey was launched by Advisor on Finance Dr. Abdul Hafeez Shaikh at a news conference in Islamabad, where he said that fiscal deficit has been curtailed to four percent of the GDP from 5.1 percent of previous year.

Due to the negative impact of COVID-19 pandemic, the growth rate remained 0.4 percent against the estimated 3 percent.

The provisional growth in industrial sector has been estimated at minus two point six four percent mainly due to the negative growth of 8.82 percent in mining and quarrying sector and decline of 7.78 percent in large scale manufacturing sector. Due to lockdown situation in the country, the growth estimates of small scale industry for the outgoing fiscal year are 1.52 percent.

Finance and insurance sector witnessed a slight increase of 0.79 percent.

The Housing Services, General government services and other private services have contributed positively at 4.02, 3.92 and 5.39 percent respectively.

During the first seven months of fiscal year, inflationary pressures were observed and inflation rose to 14.6 percent in January this year. However, due to government's timely measures, the Consumer Price Index declined to single digit at 8.5 percent in April this year. This was third successive month showing decline in inflation, whereas it dropped more than six percent in last three months.

Advisor on Finance and Revenue Dr. Abdul Hafeez Shaikh says the government will provide further relief in the upcoming budget to equip different segments of the society to better deal with COVID-19.

He said no new tax will be imposed rather the existing ones will be reviewed and cut.

The Advisor said more funds will be allocated for the social safety nets and economic incentives will be provided to the industries to cope with the prevailing difficult times.

Abdul Hafeez Shaikh said COVID-19 impacted economy of the entire world, and according to IMF forecast, the world's income is expected to reduce by three to four percent.

He said the economic stability under the present government was badly affected by the breakout of the pandemic. He said the government made utmost endeavour to protect the economy and the people from its adverse impact.

The Advisor said the PTI government took a number of steps, including giving incentives to businesses to increase exports, reducing current account and fiscal deficits.

The Advisor said 5000 billion rupees loan was paid back during one year. He said the PTI government secured loans to pay back loans of the previous governments.

Abdul Hafeez Sheikh said the government pursued a strict austerity drive and reduced its expenditures, which resulted in surplus primary balance. He said no supplementary grant was given to any government department during the outgoing fiscal year.

The Advisor said the government offered two types of packages in view of the impact of the Coronavirus pandemic.

He said a stimulus package worth 1250 billion rupees was announced to provide financial assistance to the people affected by the pandemic. He said under another package, the small businesses were given incentives through State Bank of Pakistan.