PSL2020 – Rain washes out Quetta vs Multan match at Gaddafi 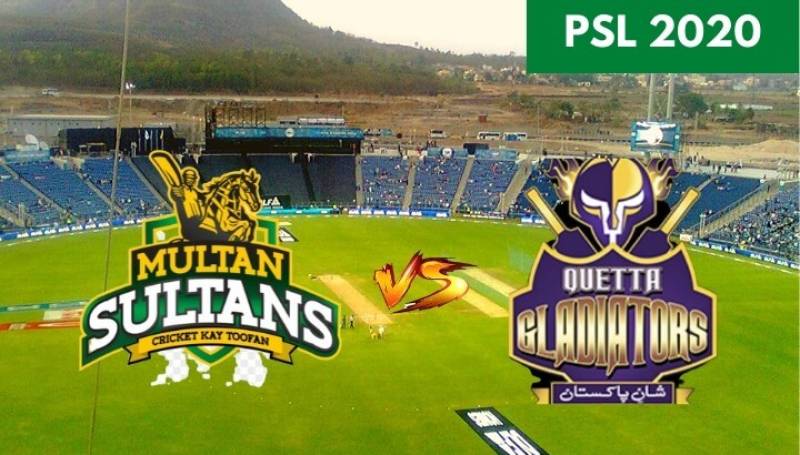 LAHORE - The 25th match of Pakistan Super League (PSL) between Multan Sultans and Quetta Gladiators was abandoned due to rain with a ball bowled at Gadaffi Stadium on Wednesday.

The persistent rain which started in late afternoon continued without any interval forcing the umpires to call off the 25th match of the PSL. Light showers in afternoon intensified in early evening robbing all the chance of staging of the match.

The square of the low-lying Gadaffi stadium was water lodged and conditions were not even suitable to even conduct toss of the match.

The pitch remained under covers with ground staff hoping that the rain will stop which did not happen and finally the umpires officially called off the match.

Both the teams shared one point each. Multan already through to the play offs of the grant event has now accumulated 12 points from eight matches and are at the points table as the top team from its respective group/pool. Multan won five matches, lost and one match failed to produce any result.

Multan are at number one team with net run-rate 1.547 as one of their matches ended without a result against Karachi Kings on March 6, 2020. Multan won their opening match against Qalandars by 5 wickets, second against Peshawar Zalmi by 6 wickets, third against Karachi Kings by 52 runs, fourth against Quetta Gladiators by 30 runs, fifth against Islamabad United by 9 wickets while they lost just one match against Islamabad United by 8 wickets.

Quetta struggling in the event are now with seven points and they are at the rock bottom at the points table with net run-rate of -1.052. They played nine matches so far and emerged triumphant in three matches while lost five of them. Quetta won the inaugural match of the PSL 2020 against Islamabad United by 3 wickets, registered their second victory against Karachi Kings by 5 wickets while recorded their third triumph against Islamabad United by 5 wickets. They lost their first match against Peshawar Zalmi by 6 wickets, second against Multan Sultans by 30 runs, third against Lahore Qalandars by 37 runs, fourth against Peshawar Zalmi by 30 runs and fifth against Lahore Qalandars by 8 wickets.

Quetta will be locking horns with Karachi Kings in its last group match/pool match on February 15 at Karachi’s National stadium.