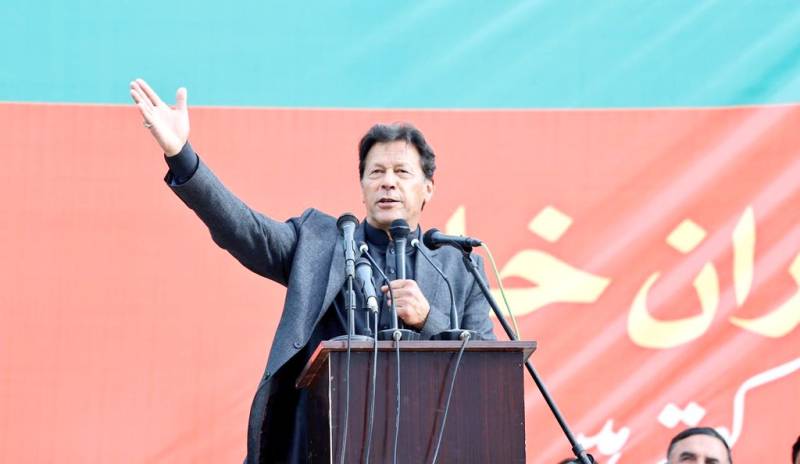 ISLAMABAD – Prime Minister Imran Khan on Friday decided to go ahead with the Lower Dir rally despite the election commission’s warnings against the violation of its code of conduct ahead of local body polls.

Khan addressed a huge public gathering at Balambat Ground in Timargara, where he slammed the opposition alliance who filed a no-trust motion against him.

"I want to make Pakistan self-sufficient, a welfare state, and to ensure law and justice," he told the charged crowd that he has "focused on these three things since entering into politics 25 years ago."

He continued that the vision of the incumbent government was to transform Pakistan into a welfare state, along the lines of the state of Madinah.

The premier also added that former rulers left the country in huge debt as they never condemned foreign aggression and drone attacks as their billions of dollars are lying in foreign banks.

Khan said supremacy of law is the topmost priority of the government besides uplifting the living standard of poor and needy people.

Addressing the charged crowd, the PM called JUI-F chief and PDM President as ‘diesel’ but he added that Chief of Army Staff General Qamar Javed Bajwa told him not to refer to Fazl as 'diesel'.

"General Bajwa told me not to refer to Fazl as 'diesel' during our conversation," Khan said while adding he's not the one who is saying that, it's people who named him as 'diesel'.

Khan's fiery address comes hours after the Election Commission of Pakistan (ECP) barred him from visiting Lower Dir in wake of the second phase of the local bodies' elections in Khyber Pakhtunkhwa.

ISLAMABAD – Prime Minister Imran Khan has reiterated to continue the fight against the ‘corrupt ...

ECO also warned the premier of legal action in case of any violation of its code of conduct under Sections 233 and 234 of the Election Act of Pakistan.