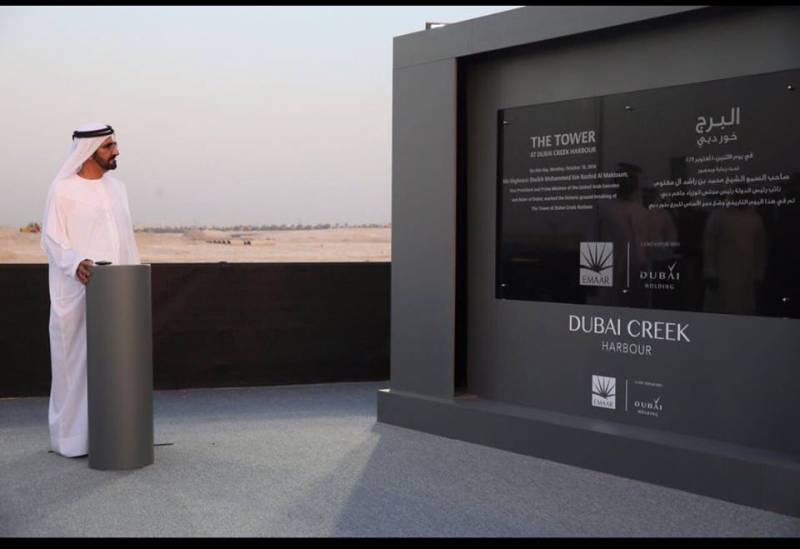 DUBAI (Web Desk) - Famous for its sky scrappers, Dubai began construction work on a tower that will stand higher than its Burj Khalifa, which is currently the world's tallest skyscraper.

The Gulf emirate's ruler, Sheikh Mohammed bin Rashid al-Maktoum, marked the groundbreaking of The Tower at Dubai Creek Harbour as construction workers laid foundations for the skyscraper at a vast patch of sand.

Although the estimated height has not been announced but the construction giant EMAAR clarified that it would surpass Burj Khalifa in terms of height which currently stands high at 828 meters.

The tower was announced in April and it would be ready at a whooping cost of $1 billion (900 million euros) before the start of Dubai 2020 expo. Designed by Spanish-Swiss architect Santiago Calatrava Valls, the tower will have observation decks providing 360-degree views of the coastal city.

Dubai already boasts of its high rise structures and an addition of the proposed tower would bolster the tourism industry of the emirate. Every year scores of globe trots pay a visit to Dubai to catch a glimpse of jaw dropping mega structures.

On the other hand, Saudi Arab's city Jeddah is also gearing up to erect a tower outshining Burj Khalifa. It is also slated to enthrall the masses by 2020.