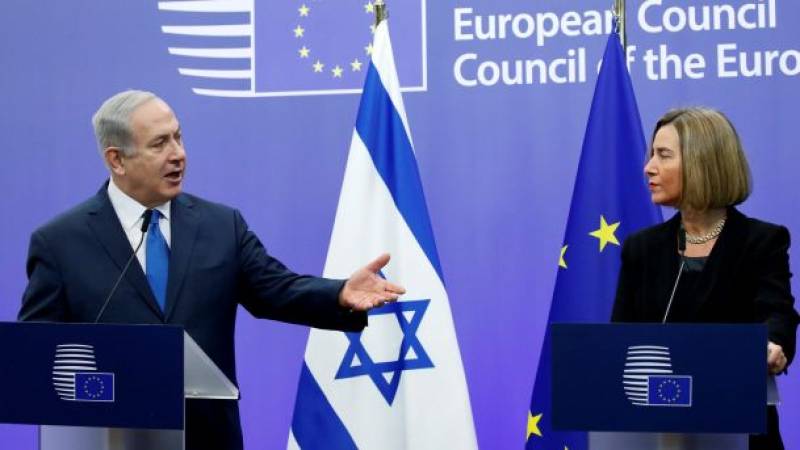 BRUSSELS - The European Union's diplomatic chief clarified that the block would not follow the US in recognising Jerusalem as the Israel's capital as suggested by Prime Minister Benjamin Netanyahu.

The statement came on Monday as Netanyahu landed in Brussels and met  EU ministers, in a bid to garner support on the Jerusalem move but  EU foreign policy chief Federica Mogherini blatantly refused to take the US line on the issue.

Netanyahu said he expected “all or most” European countries would follow the US, however, the 28-nation bloc’s foreign policy head gave a cold response, telling him not to expect this from EU.

'He can keep his expectations for others, because from the European Union member states’ side this move will not come, she said, adding that the bloc which is also the Palestinians’ largest donor would stick to the 'international consensus' on Jerusalem.

The official reiterated EU’s stance that the only realistic solution for peace was two states — Israel and Palestine — with Jerusalem as the capital of both and the borders returned to their status before the 1967 Arab-Israeli War.

Mogherini, who addressed the press conference alongside visitign Israeli premier, also pledged to ramp up efforts with the two sides and regional partners including Jordan and Egypt to relaunch the peace process.

Meanwhile, Netanyahu who earlier met French President Macron just to get the disapproval of Trump's move, said the announcement by US President Donald Trump had 'put facts squarely on the table'.

As the EU expressed alarm last week at the US decision, Netanyahu said Trump had simply stated facts by acknowledging that Jerusalem had been the capital of the Israeli state for 70 years and of the Jewish people for 3,000 years.

'It doesn’t obviate peace, it makes peace possible, because recognising reality is the substance of peace, it’s the foundation of peace,' Netanyahu said in a statement alongside Mogherini ahead of a breakfast meeting with EU foreign ministers.

The Jewish state's head 'believed' that all or most of the European countries would relocate their embassies to Jerusalem, as a sign of recognition to engage robustly with Israel, however, after nearly two hours of talks between Netanyahu and the EU ministers, EU official rejected taking the same line as POTUS.

Mogherini also condemned atta­cks on Israel and on Jews 'everywhere in the world, including in Europe'.

She indicated that US efforts appeared to be at a very early stage, saying “both horizon and framework” — the end goal and how to get there — had still not be clearly defined.

Both Israelis and Palestinians claim Jerusalem as their capital and previous peace plans failed to execute over debates on the strategy to divide sovereignty or oversee holy sites.