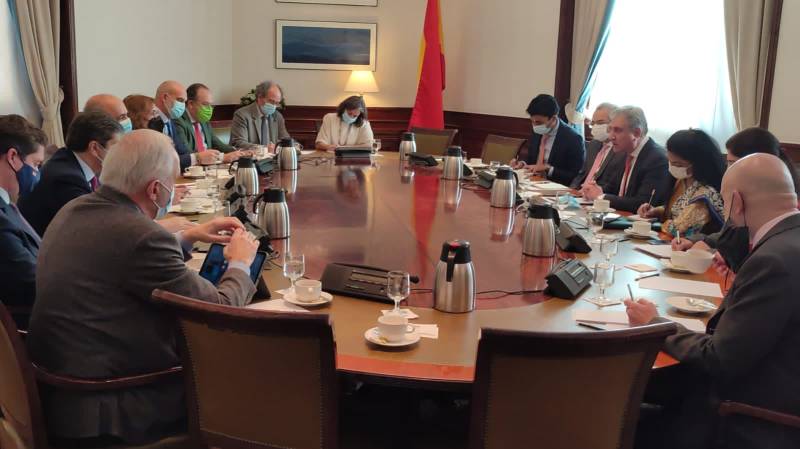 MADRID – Foreign Minister Shah Mahmood Qureshi called on President of Spain’s Congress of Deputies Meritxell Batet where the two discussed a range of issues including Pakistan’s progress on the FATF action plan.

Qureshi and the Pakistani delegation were welcomed by Meritxell Batet on arrival at Spain’s Parliament House.

During the meeting, the PTI minister said Spain is Pakistan’s important partner in the European Union and Islamabad is resolved to strengthen cooperation in multiple spheres with Madrid.

Mentioning the celebration of 70 years of Pakistan-Spain diplomatic relations, he emphasized the exchange of high-level delegations and activation of the parliamentary friendship groups.

Sharing his view on the unfolding situation in war-ravaged Afghanistan, he said Pakistan paid a huge price of instability in Afghanistan by sacrificing 80,000 lives and facing an economic loss worth $150 billion.

“Pakistan always advocated for a political solution to the Afghan issue and that after 40 years, an opportunity for the revival of peace has come which should not be missed”, FM stressed.

He also commended Spain for a donation of 20 million euros for Afghanistan and its intimation of efforts for the education of Afghan children, particularly girls.

During the visit, FM Qureshi also interacted with a delegation of members of the Foreign Relations Committee of the Congress headed by Pau Mari Klose. The committee members hailed Pakistan for celebrating the 70th anniversary of bilateral diplomatic relations.

Referring to the huge potential for cooperation in trade and commerce, the foreign minister stressed the need to exchange the parliamentary delegations.

Discussing the Afghan situation, he said the world should not repeat the past mistake rather avail the opportunity of peace by making concerted efforts as any instability there would imperil the peace of Pakistan as well as the region.

Qureshi also drew the committee’s attention towards the unilateral Indian actions of August 5, 2019, in Indian Illegally Occupied Jammu and Kashmir (IIOJK) which had risked the regional peace.

MADRID – Foreign Minister Shah Mahmood Qureshi has arrived on an official visit to Spain at the invitation of his ...