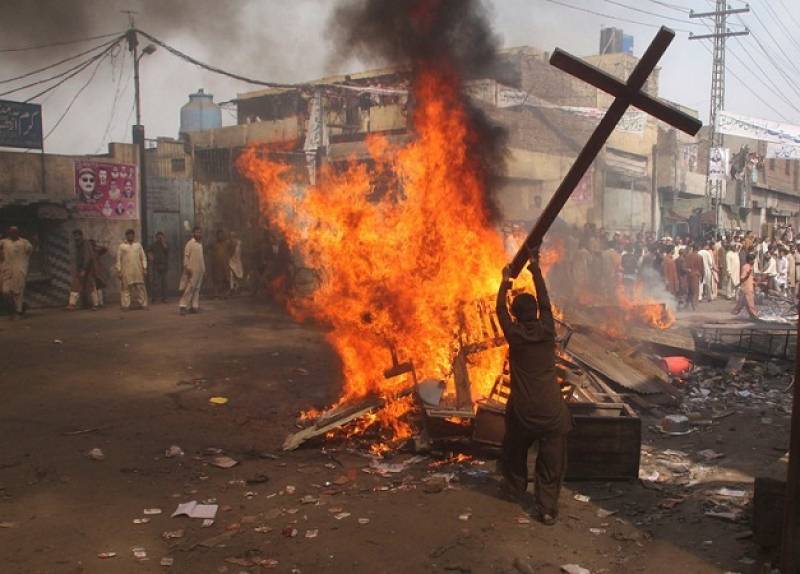 Imran Masih's immediate handover was demanded by representatives of the Muslim community after he allegedly committed blasphemy around 20 days ago.

Community members are reportedly planning to set him on fire in front of the local church in punishment for his alleged crimes.

Masih has reportedly been in hiding ever since inter-faith tensions within the area first started escalating.

Imran was earlier accused of watching a blasphemous movie on his cell phone by his fellow sanitary workers at a rural health centre (RHC) located in Bosaal, 5km away from the village of Chak 44.

An enraged mob of Muslim majority also tried to attack the houses of  Christian community this Friday, according to details provided to Daily Pakistan. However, the incident was prevented by police officials, who were informed about the impending attack through a tip-off to Rescue 15.

Members of a local mosque committee have now reportedly given the village's Christians a number of options to settle the matter. These include handing Masih over to the Muslim community for punishment, migrating from the area or collectively converting to Islam.

The Muslim community has also announced a boycott of Christians in the area, barring its members from trading with them. Christians now have to travel to the city of Mandi Bahauddin to buy their groceries, a Christian resident told this correspondent.

According to rights activist Aftab Gill, almost half of the Christian population have already left their houses and moved in with nearby relatives in response to the prevailing tensions in their village.

While an FIR has not yet been registered against Masih for his alleged crime, the mosque committee has announced 1 lakh cash prize for information about his whereabouts.

Muhammad Saleem Bhatti, who heads the mosque committee and is also an elected vice chairman of the union council on ticket of PML-N, has announced that they will do everything possible to bring the blasphemer to justice.

However, local police has concluded that the blasphemy charges leveled against Imran Masih were false after investigating the matter thoroughly. No evidence is available to confirm whether he genuinely committed the crime, said Assistant Sub-Inspector Muhammad Nawaz.

Saleem Iqbal of Care Council for Human Rights, who first brought this situation to light, says that the government and the interfaith harmony council should take steps to normalize the situation before tensions spiral out of control.

Talking to Daily Pakistan Global via telephone, Iqbal said that he had unsuccessfully attempted to approach Christian parliamentarians and provincial assembly members for assistance.

"All these minority MNAs and MPAs such as Kamran Micheal, Shehzad Munshi, Tariq Masih and Shakil Marth, and members of interfaith harmony councils enjoy the perks of representing us in the legislatures. However, they have done nothing till now and will only arrive here once tragedy strikes," he said.

Urging the police and local administration to establish their writ in the area, Saleem Iqbal said that even if a single individual had committed blasphemy, there were laws to try him for his crime. Targeting a whole religious group on the basis of the alleged misconduct of one person is highly regrettable, he said.

"Now is the right time for law enforcers to take action," he said.