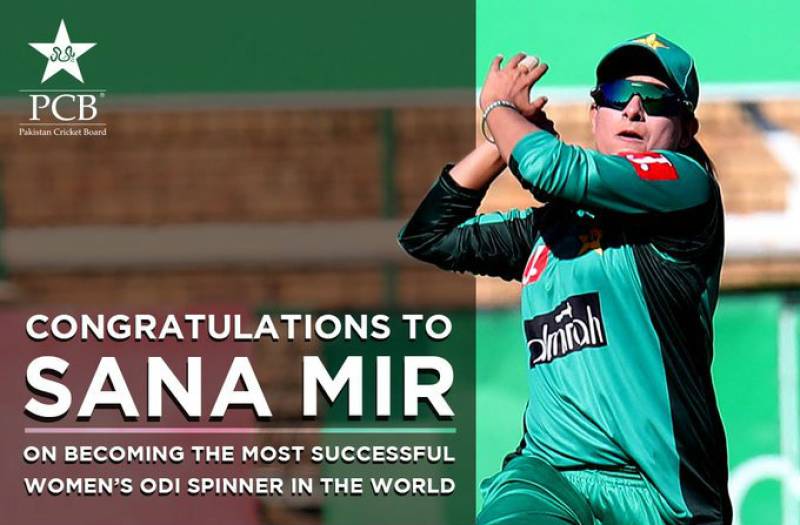 LAHORE – Pakistan off-spinner Sana Mir has become the most successful women's ODI spinner in history after she took her 147th wicket, highest ever by any spinner in One-day International (ODI) cricket.

Mir had 146 wickets under her belt when she stepped out on the field on Sunday to play against South Africa in the ongoing ICC Women's Championship being played in South Africa.

All rounder @mir_sana05 sharing her views on her record breaking 1️⃣4️⃣7️⃣ ODI wicket and the #SAWvPAKW ODI series that ended with a dramatic tie in Benoni on Sunday.#BackOurGirls pic.twitter.com/nTQ3cGrWqA

She took only one wicket but the only wicket she took in the match turned out to be the most crucial one as she dismissed Sune Luus, who played a knock of 80 runs. It was her 118th appearance for Pakistan and surpassed West Indies spinner Anisa Mohammed and Australia's Lisa Sthalekar, who had accumulated 146 wickets each. Consequently, Mohammed and Sthalekar have slipped on to the second and third position, respectively.

Currently, Mir is placed on the third position in the ICC's ODI bowling ranking, which is topped by Indian pacer Jhulan Goswami.

She's just taken her 147th ODI wicket meaning that she now has more wickets in the format than any other female spinner in history ? ?

Moreover, Mir climbed up to secure the third position in the list of most wickets by any women bowler in history. However, Goswami atop the list here as well with 218 wickets and is followed by former Australia bowler Cathryn Fitzpatrick, who has 180 wickets.

Mir was congratulated by fellow cricketers:

Congratulations @mir_sana05 you make us proud! ??