Meet the first Pakistani to own a plot on Moon

Sohaib Ahmed, 23, bought one acre of lunar land for his 26-year-old bride this year 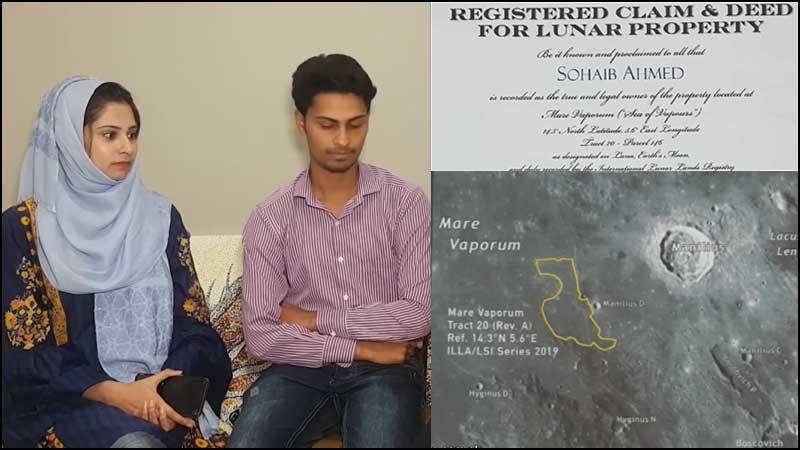 LAHORE – A Pakistani man has made history by purchasing a piece of land on the Moon for the love of his life.

Sohaib Ahmed and Madiha Sehar, who got married this February, have been in the headlines since they are the only ones in the South Asian country to own a lunar land.

The 23-year-old, who originally hails from the Jhang city of Punjab and now settled in Islamabad, bought one acre on the Moon for just $45 (nearly PKR 7,362) – the idea struck to his mind when the 26-year-old bride asked him for a unique gift.

Apparently, it was not as easy as buying a land on this planet, the Earth. However, they got lucky after watching a programme on late Bollywood actor Sushant Singh Rajput, who had a powerful telescope (Meade 14" LX600) at his home to survey a plot he had bought at Moon’s Mare Moscoviense, or the Sea of Muscovy, some two years ago.

Ahmed followed in Rajput’s footsteps and started doing research on how the actor had managed to buy his lunar plot.

“I finally found the International Lunar Lands Registry and after going through the website, I decided to buy a one-acre plot on the moon,” he told DailyPakistan.

“In this region (South Asia), the ultimate promise a lover can make is ‘tumharay liye chand bhi lay ayoon ga’ (I will bring down the moon for you). And my ‘Ranjha,’ literally, did!”

When asked if he intends to visit the Moon with his wife, Shoaib explained they were planning to take a trip and did contact the International Lunar Land Registry. But, he added, they (the agency) are pre-booked till 2024.

Sohaib added that he now wants to purchase the telescope Sushant had (costing nearly PKR 2.5 million ($14,970).

Although the Lunar Lands Registry website makes lofty claims that the company “will build permanent residences, tourist facilities, research centers and develop Luna’s natural resources, while also respecting and preserving its incredible beauty”, the fact remains that no one can legally buy a piece of and on the Moon

Pakistan signed The Outer Space Treaty, on September 12, 1967, which came into effect on October 10 that year. It states that outer space, including the Moon and other celestial bodies, are the “common heritage of mankind”, and cannot be owned by any nation. For common heritage, private ownership does not apply.

WASHINGTON – NASA is all set to launch its brand-new $23 million toilet for astronauts tomorrow. The special ...