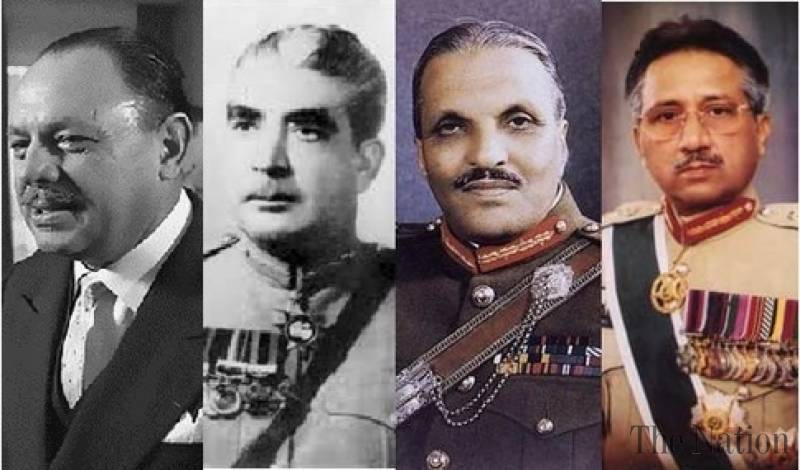 Article 6 of Pakistan’s 1973 Constitution, which pertains to ‘high treason’, is one of the most known, least applied articles. Its parallel in human anatomy is called the appendix, which is also as well known. Most of us once in a while have seen it happen to someone we know.

If you, my reader, happens to be one of those who have not just witnessed but experienced it, my felicitations to you for having more functional organs in your body than average Pakistanis.

In my observation most of us men, particularly the youth, in Pakistan cruise through our entire lives by using only a few organs, and we keep the rest – particularly our brains - conserved for a rainy day. This, by the way, explains why most men are conservative in their private spheres despite pretending and projecting to be progressive in the public domains. But this piece is neither about Article 6 nor about our idiosyncratic use of our anatomy.

Those interested in Article 6 can click here (https://pakistanconstitutionlaw.com/article-6-high-treason/). Those, who either know it or know there is no point in knowing it, carry on reading.

This piece is triggered by two news: SC is mulling ways to get Gen. Musharraf extradited; the POTUS tweeted ‘TREASON?’ (https://twitter.com/realDonaldTrump/status/1037464177269514240) after NYT published an anonymous op-ed, written by his team, I say; with his knowledge, I believe!

The use of capital letters followed by question mark by the US President in his tweet has two implications: One he is not sure if its treason; two, he is wondering if its high or low treason!

The second interpretation is solely a figment of my ignorance, that I call naïve imagination.

Here, an unsolicited advice to both the SC and reinvigorated Parliament: Pls consider reviewing, if not amending Article 6, by adding nuances of low and moderate along with high with treason.

Two tips how to determine the degree of treason: if a General stages coup ala Ayub Khan, i.e., based on pure conscience that civilians were making a mess, and civilian of the time too agreed (even though there were guns or two in the room), it should be classified as low treason.

If, ala Zia, the coup took place on the invite of opposition leaders, or ala Musharraf, if it were provoked by an anti-State act of a sitting PM, it ought to be declared moderate, if not low treason.

Technically, Ayub Khan’s coup can’t be termed treason as it predated the 1973 Constitution. The episode, however, can serve the incumbents to learn certain industrials growth lessons.

Since Pakistan has become so accustomed to Army led ‘treasons’, this word must be changed to suit our peculiar socio-political dynamics and be mentioned in the Constitution as the reasons. The prefix of ‘high’ mustn’t be there at all. This word, wherever, whenever acts more like a motivational imperative than a neutral descriptive adverb.

I would even suggest that those who are alleged of such ‘high treason’, and obviously wrongly, must be declared national heroes because their coup always brought either growth or a better and popular version of democracy.

The PPP should take lead on this amendment. One because it's not only fond of, and expert in constitutional amendments, but also because historical evidence shows PPP always formed the government after Ayub/Yahya martial law, after Zia, and after Musharraf too.

Hence on a side note, instead of pushing for a democratic transition that never lets it back in, PPP should consider creating conditions for a coup (like 1977) so that it can roar back after a decade-long democracy break. But, unfortunately for PPP, this expertise now lies with the PML-N.

To neuter the concept and practice of treason in Pakistan, I propose its social application.

That is, it should be replaced with the word (and pervasive religious practice) of cheating in marriage. Now, I don’t need to tell what will be high treason equivalent of marital cheating. Though, something of national pride; Pakistan figures high in the world in this practice, which is so highly eulogized by other men.

The determination of moderate treason would need serious reflections; and my submission is that sexting nevertheless be declared low treason.