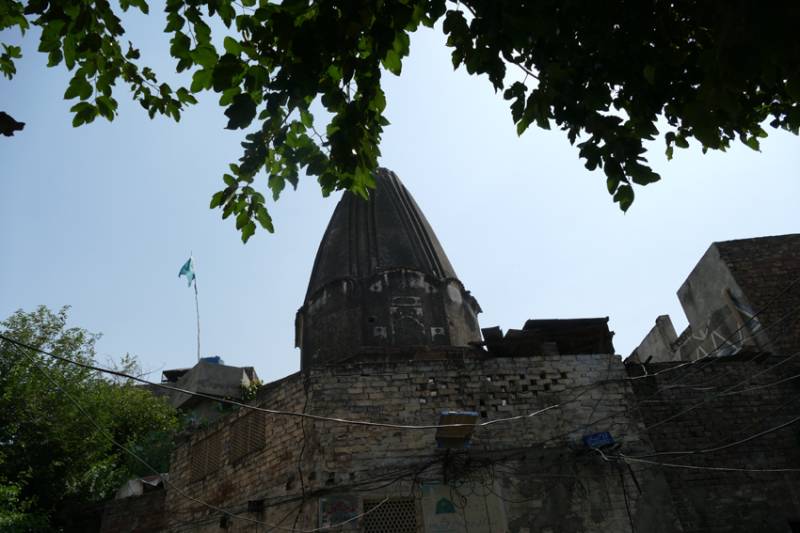 Section 295 of the Pakistan Penal Code makes it a criminal offence to damage or defile place or worship, with intent to insult the religion of any class. No one is permitted to destroy, damage or defile any place of worship, or any object conceived sacred by any class of persons with the target of thereby insulting the religion of any class of persons or with the knowledge that any class of persons is likely to consider such damage, destruction or defilement as an insult to their religion. If someone commits such offence, he/she’ll be punished with imprisonment of either description for a term which may extend to two years or with fine or with both.

But the irony of the fact is that the Hindus, who are free to live in and work everywhere across the country, are still deprived of their basic rights, protected under Section 295 of the PPC.

Before the partition of the subcontinent, the city of Lahore had a large number of temples which are either in the form of ruins these days or banished from the earth.

After the partition of the subcontinent in 1947, a large population of the Hindus who had been residing in Lahore for decades migrated to India. After they moved out, Muslim refugees settled in their buildings.

At present, a few Hindu families can still be located in Lahore. Among those, only a few are local while rest of them migrated from other cities of Pakistan for education and earning purposes i.e. jobs or business etc.

Today, many of the buildings, formerly used by Hindus, present a different picture.

In Lahore, there is a number of old temples being used as commercial points or residences of the Muslims despite the fact that the worship places of every religion are sacred and respectable. These places must not be used as residences; even if it is the case, the income generated from these properties should be used for the welfare of the Hindu community.

Take Mandir Thaan Bhaeru, situated at Peer Ghazi Road Ichra, for instance. This temple covers a vast area of the land, and the whole building was constructed with solid materials. Pages of the history reveal that this temple, which was built during the Sikh period, had many buildings in it. Before this, a rough dais and a Samadhi on it. A Hindu, who was a Godar by caste, used to worship over there. After he passed away, his son Vasti Ram started to serve there. He got a Kashti chabutra made there along with a well. When he died, one Jawala Nath started serve there. He got Moraan Twaif's mother free from Aasaib (demons). (Moraan was Ranjeet Singh's beloved and wife).

Moraan donated one hundred carts of bricks and cash for construction of the building. Later, Lala Ram Chandar, brother of Saawan Mul, Nazim Multan, got Bhaeru Ji's Asthan constructed. Entrance from the main wooden gate is big enough for an elephant to get through easily. One building was for those who used to cook Langar/Parsaad (sacred food to distribute among the general masses) daily. The second was a double-storey building called Dhuni Wala. A lamp had been lighted 24/7 and never missed, even for a single moment. The third building was specified for the temple/worship place. There had been a big well near it having two wheels, and a very shady java plum tree as well. The dome of the temple was really high and beautiful, and its floor and walls very solid. A big bell had been hung there. Another lamp had been lighted there, day and night. There had also been a vide courtyard in the eastern side. A dais had been constructed there for alter of Shiv Ji Maharaj. There had been many chambers for Pujaris (Hindu temple priest) and other servants. On the north side, there were some other buildings where different kinds of trees had been planted.

Devotees used to arrange a big festival every year in the month of Bhadoo (nearly August-September) on Sunday with the appearance of a new Moon.

Presently, a wooden old gate of about 4 inches thick plank is still erected there. There are three arches; in the middle one, there are small rooms (left & right) – perhaps under the use of watchmen. At the end of the third arch, a man sits and sells edibles like candies and chocolates. A large number of Muslim families are residing inside the temple. A mosque has been constructed on the right side of the main entry gate in the land of the temple area. 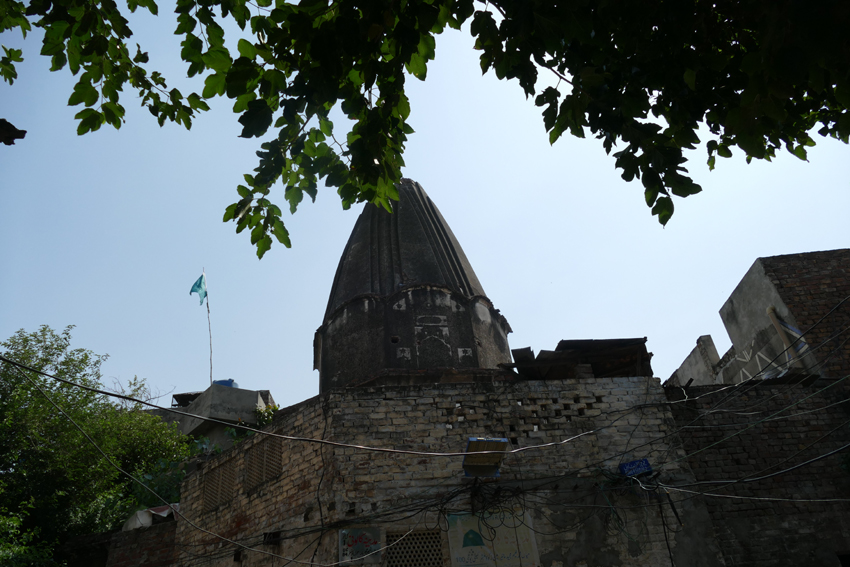 Another two-centuries-old temple - Thakur Dawara Raja Teja Singh - is situated in Moti Bazar, inside the Walled City of Lahore. Its founder was Raja Teja Singh, the commander-in-chief of the Khalsa troops, who led the Sikh army across the Sutlej River with the object of waging war against the British.

The entrance of Temple from the north had a flight of steps which opened to a wide courtyard. In the midst of the courtyard, on a raised plate, is the Mandir (temple), which was lofty and majestic. In front of the doorway was a chaste gallery of stone, of great beauty. The walls inside were decorated with stone carvings, and in a niche of marble are gracefully placed the images of Sri Krishna Ji Mahraj and Radhika Ji, dressed in rich cloths and adorned with precious ornaments. The tower of the Mandir was a lofty parallelogram of three stories. The top of the tower was ornamented with the pinnacle of gold, and golden bells were attached in several places.

Currently, about 15 Muslim families are residing inside this dilapidated building. However, the wooden doorpost of the main entrance is still erected there.

It is really sad to see that these temples have not only been occupied by the people as their dwelling but also making a mockery of the places of worship by building toilets inside.

Renowned historian and President Punjabi Parchaar Ahmed Raza Watoo terms it as blasphemy, saying no one has a right to disgrace the worship area of any religion or community.