A spotlight on mountains in the Post-2020 Global Biodiversity Framework 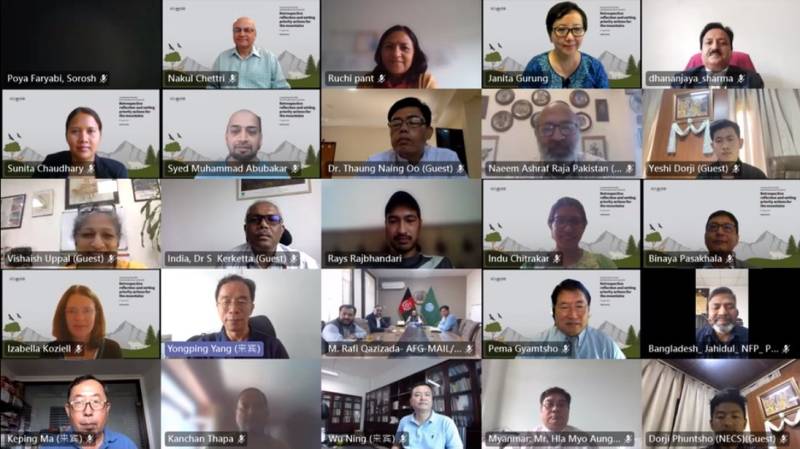 KATHMANDU - Nepal’s Rt Honorable Prime Minister, Sher Bahadur Deuba has called for a common regional voice at the upcoming United Nations Biodiversity Conference (COP15) on conservation and sustainable use of mountain biodiversity for building resilience to climate change, disaster risks, and other shocks.

This message was delivered at a webinar on “Towards the Post-2020 Global Biodiversity Framework: Retrospective reflection and setting priority actions for the mountains” organized by the International Centre for Integrated Mountain Development (ICIMOD). The Prime Minister also reiterated Nepal’s commitment to the conservation and sustainable use of biodiversity and the adoption of the Post-2020 Global Biodiversity Framework (2021–2030). “Nepal has successfully achieved a zero-poaching year – for tigers, rhinos, and elephants, and we have also expanded our protected areas network.”

The webinar was attended by Convention on Biological Diversity (CBD) focal persons and high-level representatives from Afghanistan, Bangladesh, Bhutan, China, India, Myanmar, Nepal, and Pakistan to share their success stories related to the targets achieved so far. Delegates agreed on the need for urgent actions to sustain the fragile ecosystems of the Hindu Kush Himalaya (HKH) and the other sub-regions in Asia.

In his welcome remarks, Pema Gyamtsho, Director General, ICIMOD observed that 9 August is celebrated as the International Day of the World’s Indigenous Peoples and stressed the need to recognize the roles that indigenous communities play in biodiversity conservation. “The world’s biodiversity hotspots are also centers of linguistic and cultural diversity. We have over 1000 living languages in the HKH, and they are a rich store of indigenous knowledge. Both the biological and cultural diversity of the region are threatened and today is a good day to remind ourselves of this impending loss.” He called on delegates to reflect on what has been achieved over the last decade and reorient the collective effort to identifying gaps and priorities to contribute towards the Post-2020 Biodiversity Framework.

In a special video message, Elizabeth Maruma Mrema, Executive Secretary of the CBD, talked about how the world is reeling under a severe biodiversity crisis and how the COVID-19 pandemic has reaffirmed that biodiversity is fundamental to our survival. Mrema said, “The importance of mountains is well known as they cover at least 22% of the world’s land surface and provide habitat for about one billion people. Additionally, half of the world’s biodiversity hotspots are concentrated in the mountains, which support about 25% of terrestrial biodiversity. The Post-2020 Global Biodiversity Framework is our roadmap, and its implementation is a necessity for the future we want. The next 10 years will be most critical for our generation.”

CBD implementation in the HKH and South Asia

The technical session of the webinar was led by Sunita Chaudhary, Ecosystem Services Specialist, ICIMOD who presented a regional overview on the progress made against the Aichi Targets by the eight HKH countries. The analysis shows commitment and varying levels of progress by HKH countries against the 20 Aichi Targets. Good progress has been made, including on Aichi Target 11, which focuses on protected areas and other effective area-based conservation measures (OECMs). HKH-member countries have also made notable efforts in raising awareness among different stakeholders, especially local authorities, the general public, youth, and school children.

During the webinar’s Q&A session, a panel discussion on priority actions for the Aichi Targets and the PoWMB provided a platform for CBD Focal Persons from Afghanistan, Bangladesh, Bhutan, China, India, Iran, Maldives, Myanmar, Nepal, Pakistan, and Sri Lanka to share their progress on the Aichi Targets.

Ruchi Pant, Chief – Climate Change, Resilience, and Chemicals Management at UNDP India shared her perspectives on the importance of OECMs in achieving Aichi Target 11 in the region. She also provided an overview of experiences from India, offering experiential learning to other countries.

In the closing session, Izabella Koziell, Deputy Director-General, ICIMOD, summed up the key takeaways of the meeting and appreciated the CBD Focal Persons for striving to achieve the biodiversity targets. She noted that the draft of the post-2020 Biodiversity Framework has not recognized mountains as key and vulnerable ecosystems and stated that ICIMOD has taken a proactive role in addressing this through its HKH Call to Action, campaigns like the HKH2Glasgow – Road to UNFCCC COP 26, and various pathways to CBD COP15, among others.

Nakul Chettri, CBD Focal Person and Regional Programme Manager – Transboundary Landscapes, ICIMOD, thanked the CBD Focal Persons, colleagues from ICIMOD, UNDP India, and other organizations for attending the event. He noted that ICIMOD has planned a series of activities in the lead up to CBD COP15 and is also leading a special project on “Aichi Target 11 in South Asia sub-region” with the Secretariat of the Convention on Biological Diversity (SCBD) to help speed up implementation of all priority actions and achievement of targets in the South Asia sub-region.

The webinar helped to develop a consensus on priority actions for the Post-2020 Global Biodiversity Framework with particular reference to the PoWMB and approval and ownership of the draft reports presented.

ICIMOD has conducted a thorough review of progress against Aichi Target 11 for the South Asia sub-region (Afghanistan, Bangladesh, Bhutan, India, Iran, Maldives, Nepal, Pakistan, and Sri Lanka) as part of its special project on “Global Partnership on Aichi Target 11” with the Secretariat of the Convention on Biological Diversity (SCBD).