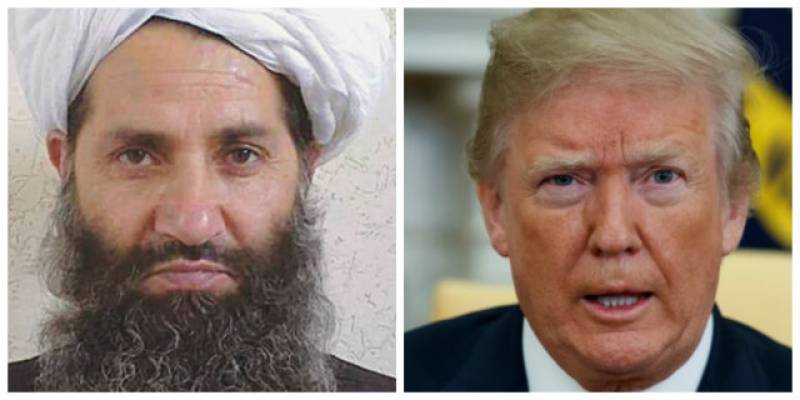 KABUL - Taliban supreme leader Mullah Hebatullah Akhundzada has offered direct negotiations with the United States in a bid to end the ongoing conflict.

“The only path to rescuing ourselves from all these calamities is for all American and other occupying forces to leave our country and for an independent, Islamic, intra-Afghan government to take root. Our Jihad began for this exact purpose and in conjunction to our armed Jihad, we have kept the doors of understanding and negotiations open to reach this objective and appointed the Political Office of the Islamic Emirate as the exclusive avenue of activity in this regard,” Hebatullah said in a message released ahead of Eid.

He again called on the US to hold direct talks with the group and said if the American officials believe in a peaceful resolution, then they must resolve the crisis through dialogue.

“If the American officials truly believe in a peaceful end to the Afghan imbroglio then they must directly present themselves to the negotiation table so that this tragedy (invasion) – the destructive effects of which mainly harm the American and Afghan people – can be resolved through talks.

“The biggest mistake on part of the American officials is that they approach every problem with stubbornness but force cannot yield results in every case,” the message read.

Following the announcement of a temporary ceasefire by Ashraf Ghani-led government with the Taliban last Thursday, the United States had said it was ready to participate in talks with the Taliban.

Deputy Assistant to US President Donald Trump and Senior Director for Central Asia at the National Security Council, Lisa Curtis, said US cannot act on behalf of Afghan officials in the peace talks with the Taliban, but they want to participate in the talks.

“The United States is ready to participate in the discussion, but we cannot serve as a substitute for the Afghan government and the Afghan people. A political settlement must be negotiated through a process that is Afghan-led and Afghan-owned,” said Curtis.

After Ghani’s announcement, the Taliban also responded and announced a three-day ceasefire, over Eid, on their part. However, this did not include foreign forces.

The ceasefire announcement was warmly welcomed by major allies of Afghanistan.

Haibtullah also lashed out at the Afghan religious scholars who recently issued an edict against the war in Afghanistan, the Khaama Press reported.

“My message specifically to the Ulema (religious scholars) of Afghanistan is that America and her allies have been defeated in nearly every aspect of this war, therefore, they are currently seeking support of scholars for their vested interests,” he said.

Although Taliban have long been advocating for face-to-face talks with the Americans, it is the first time the Taliban chief has floated the idea amid fresh diplomatic efforts to push for a political solution to the problem.