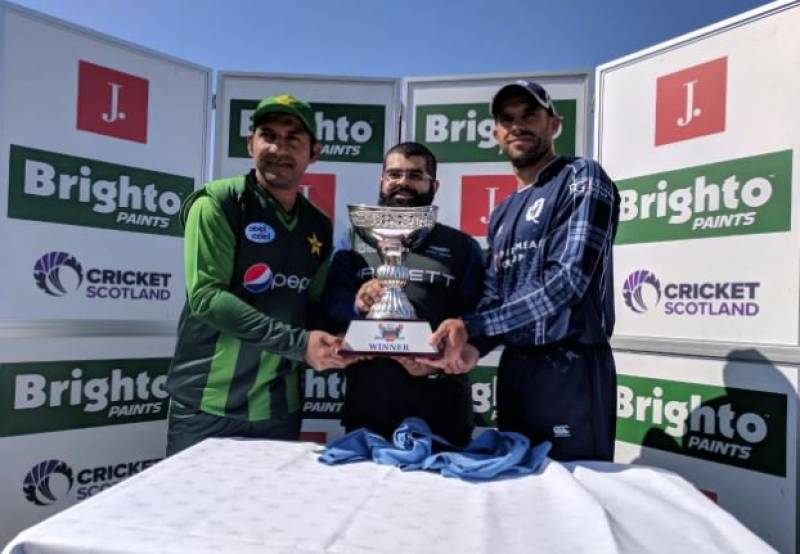 EDINBURGH - Pakistan won and sealed the series by 84 runs against Scotland in the second and final T20I on Wednesday, courtesy a three-wicket haul by allrounder Faheem Ashraf and a fiery 49* runs knock of Shoaib Malik.

The visiting side had earlier beaten Scotland by 48 runs in the series opener in Edinburgh on Tuesday.

Malik scored 49 off 22 balls, including one boundary and five sixes.

Earlier, Pakistan won the toss and opted to bat against Scotland in the second T20 in Edinburgh here on Wednesday.

Sarfraz's men beat the hosts by 48 runs in the series opener on Tuesday.

Opener Ahmed Shehzad was caught in the deep for 14 off 12 balls, as Pakistan lost the first wicket at 33. Fakhar Zaman was sent to the pavilion for 21 off 15 balls, leaving the tourists at 46-2 after 5.2 overs.

Skipper Sarfraz Ahmed and all-rounder Shoaib Malik’s aggressive play helped their side score a total of 204 runs in 20 overs at the loss of four wickets.

Today's match is scheduled to begin at 8pm (PST) and 4pm on BST.

Pakistan are currently the number one side in the ICC T20I team rankings while Scotland are ranked 11.

“We were not taking them lightly even before the England match,” said Pakistan’s captain Sarfraz Ahmed ahead of T20Is against Scotland.

During their ongoing tour of the United Kingdom, Pakistan won the one-off Test against Ireland and drew the Test series (1-1) against England.

What TV channel is it on?

PTV Sports will telecast the match live in Pakistan while Sony will broadcast the games in India and throughout the Asian sub-continent.

How to watch online?